That was the last time I sat down to write in this space or have more than one minute of alone time. For the record, in order for me to think coherent thoughts and figure stuff out, I need regular blocks of writing time and alone time.

Two weeks of master bath renovations, while a sick child missed an entire week of school, at the exact same time I was attending appointment after appointment to make selections for the house we are building, because: THE PLUMBERS AND ELECTRICIANS ARE COMING!

Mix in there an all-day pumpkin patch field trip and an anniversary get-away that doubled as a new furniture and light-fixture shopping weekend. Oh, and also, answering dozens of additional emails and home visits from Craig’s List people, as I sell off the old furniture that won’t fit into our new house.

My world has been a blur of choosing between maple and oak, graphite and brownstone, bullnose and ogee, venetian bronze and brushed nickel. Single handle, double handle, 4 inch or 8 inch, center or side mount (faucets). Four inch or 7 inch, prefab or stained-on-site (flooring). Seven feet or 6.5 feet (shower head). And infinite choices of carpet and tile and paint.

There are two kinds of people in the world: Those who care where their shower drain is located (center, left or right) and those who have never, in all their lives, noticed the location of a shower drain.

Prior to last week, I would not have known which I was. But I can now say, without reservation, I am of the people group who neither cares about nor notices shower drain placement.

And I promise you, every time I am presented with a question such as, “Where would you like the shower drain?” and I respond with, “I don’t really have an opinion about this—do whatever you think” (the diplomatic version of “I don’t care.”), several people will tell me all the reasons I MUST CARE about this.

This is, by far, the busiest season I’ve had since we adopted our youngest daughter seven years ago (which you may recall, was also the exact same season I ended up in therapy and on antidepressants).

But not actually me.

Paddling frantically at this pace makes me feel like my little boat is sinking. I start looking around for things to throw overboard so I can float again.

It sounds like I’m complaining, but I am not complaining. I am very, very, VERY thankful to have the luxury of custom building my own home. Most people never get the opportunity to do this. I never dreamed I would be one of them. It’s a blessing to get to design my dream kitchen, for sure.

But here’s my confession: As much as I know this is a blessing, it’s hard for me to embrace the eternal value of light fixtures and granite counter tops. Especially when I was very content in the home we currently own. And especially when I have to repeatedly turn down time with a friend so I can select cabinet handles. It feels upside-down to me.

All I keep thinking about is this:

“Do not store up for yourselves treasures on earth, where moths and vermin destroy, and where thieves break in and steal. But store up for yourselves treasures in heaven, where moths and vermin do not destroy, and where thieves do not break in and steal.” (Matthew 6:19-20)

Then he said to them, “Watch out! Be on your guard against all kinds of greed; life does not consist in an abundance of possessions.” And he told them this parable: “The ground of a certain rich man yielded an abundant harvest. He thought to himself, ‘What shall I do? I have no place to store my crops.’ “Then he said, ‘This is what I’ll do. I will tear down my barns and build bigger ones, and there I will store my surplus grain. And I’ll say to myself, “You have plenty of grain laid up for many years. Take life easy; eat, drink and be merry.”’ “But God said to him, ‘You fool! This very night your life will be demanded from you. Then who will get what you have prepared for yourself?’ “This is how it will be with whoever stores up things for themselves but is not rich toward God.” (Luke 12: 15-21)

In my head it ends up looking like this:

BUILDING A NEW HOUSE = SANDY IS A FOOL. 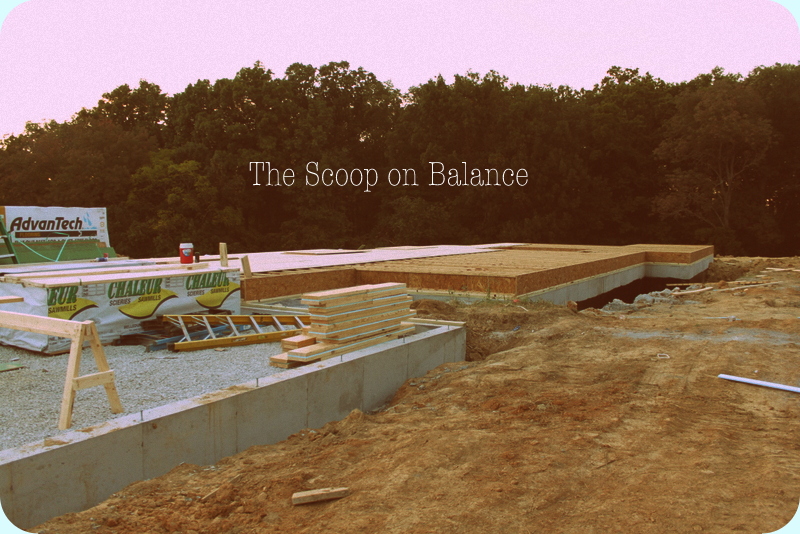 So, I’ve been pouring all this out to Jesus as I rush from appointment to appointment with my bushy eyebrows and chipped fingernails to build my foolish bigger barn.

Here’s what He spoke to my heart:

1. This is just a season. It won’t last forever. I WILL have well-groomed eyebrows again, bless God.

2. God uses stressful seasons to reveal and remove junk in my character. Never pleasant, but always necessary. Let Him work out the junk.

3. Jesus was a carpenter. God in Flesh could have chosen any profession, and He chose to build houses and furniture, of all things. This is when I know Jesus is talking to me, because I never considered His line of work as anything significant, until now.

4. With every appointment, phone call, text and e-mail exchange, I’m not only encountering carpet samples and light fixtures and kitchen appliances, but PEOPLE. Real-life HUMANS. Humans who have families and friends, trials and pain. Humans who desperately need peace and joy and hope. People who need Jesus. What could be more eternally relevant than that?

In the last three weeks, I paused in the midst of every single appointment to take the time to get to know the person serving me. I learned that one of them used to compete in triathlons and loves a glass of bourbon. I learned one celebrated a 5th wedding anniversary while another is finalizing a divorce. One attended a daughter’s college graduation the same week another took her daughter to Disney World. Tuesday, I spent thirty minutes talking to a contractor, who showed me pictures of his children, his home and his native country. Last night, I listened as the people who bought my rocking chair from Craig’s List told me about their jobs, their home and their new grand-daughter.

I’ve determined that every appointment for house selections is divinely orchestrated so Jesus can love people through me.

This feels eternal to me.

When I have a second to digest it all, I’m excited about my new house, even in all it’s detailed, scheduled craziness.

But, would-to-God that I honor The Carpenter in the craziness.

That, rather than running and rushing over everyone and everything, I’d stop and notice the person in front of me, and thank them, ask questions and offer peace. I pray I offer them The Prince of Peace. So that when this life is over, and I stand before the Lord, He won’t say, “You fool” but rather, “Well done.”