Welcome again to Fitness Friday. This is THE place to be on Friday if you are one of the 700 bazillion people who have made weight-loss and physical fitness your New Year’s Resolution.
(FYI…700 bazillion is just an estimated figure. It may actually be more like 700 GA-zillion).

If you haven’t already joined, Fitness Friday now has an accountability group we are calling “Fitness Friday Fanatics.” We are hosting the group on a private blog, where we can share our struggles and victories, with no worries of it being broadcast over the entire blog-o-sphere.

If you would like to join, please leave a comment with your e-mail, or you can e-mail me privately. You will then receive a special invite to the Fitness Friday Fanatics blog where we will cheer you on to be fit and healthy. We’re having lots of fun over there…and we are meeting our fitness goals in 2009!

Speaking of meeting fitness goals, I am always incredibly motivated when I see other people beating the odds, and getting healthy and fit despite their circumstances.

Amy is one such person. I recently found Amy when I read a comment she made on another blog. It really caught my attention, so I contacted her to see if she would share her story on Fitness Friday.

And here it is:

Amy had always been a fairly active person before having babies, mostly jogging and walking, but rarely exercising during her three pregnancies. Though Amy had gained a significant amount of weight in her first pregnancy, she was back to pre-pregnancy weight after just one year.

After baby number two, the weight didn’t come off as quickly, so Amy started exercising daily. She packed her two small children into a double stroller, hit the running trails and eventually joined a local gym. After about a year, she was in great shape, and training for her first 5K and long distance bike ride.

Then tragedy struck when she suffered two miscarriages in just three months.

Understandably, with her heart, mind, body and soul still so raw with pain from the pregnancy losses, she decided to hold off on exercising and focus solely on the health of her unborn child.

As a result, she gave birth to a healthy baby girl. Unfortunately, all the muscle she worked so hard to build before the pregnancy had disappeared.

At the time of her daughter’s birth, Amy weighed in at 200 pounds. The first two weeks following the birth, Amy dropped thirty pounds, bringing her down to 170 pounds. But she was stuck. Recovering from her third c-section, but oh-so-ready to get rid of this extra weight, Amy started slowly. First, just eating right and exercising at home.

Later, she started keeping a food journal and used the Weight Watchers point system to further bring her eating under control. After several months of that, she again joined the gym, where she heard her fitness instructor mention triathlons.

Something resonated with her. Amy now wanted to do a triathlon.

She got so excited, she went home and told her husband she was going for it. At first, she faced many roadblocks.

Two, her gym didn’t have a pool.

And three, she knew if she really wanted this thing, she’d have to sacrifice a lot (uh, sleep? time??) to train.

After seriously asking herself if she really had it in her to train for and compete in a triathlon, she answered “YES”!

And she dove in head first…literally.

Listen to this, in Amy’s own words:

“I went to the pool for the first time. I got in and ‘attempted’ to swim. I am so glad that I didn’t know anyone there. I was shocked at how horrible I was. I couldn’t swim the length of the pool. I barely made it half way. And to be honest I was more dog paddling than swimming. For weeks I went to the gym in the morning and kept trying. I would watch the other swimmers and mimic what they were doing. I am sure they all thought I was pretty weird. I would try to nonchalantly put my head under the water and watch them as they swam past me. Despite how ridiculous it was, it worked. In no time at all I had taught myself to swim.”

Ha! Don’t you love that! There’s no stopping this girl!

With the triathlon only a few months away, she crawled out of bed each morning at 5:30 am for a gym work out, followed by a daily bike ride with all three kids. That’s right: two in a trailer attached to the bike and one in the bike seat!

In July of 2007 Amy reached her goal and completed her first triathlon. 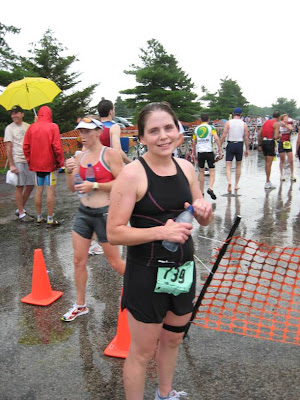 And she is currently training for triathlon number two.

And she has lost 60 pounds since the day her third daughter was born.

Amy ‘s advice to you?

“Start saying ‘I can’. It is so easy to say ‘I can’t.’ We put up all these roadblocks in our lives because we simply say ‘I can’t.’ This defeatist attitude robs us of attaining our goals and showing ourselves all that we are and all that we really can accomplish.”

I couldn’t agree more, Amy. Thank you so much for showing us that “I can” will bring us face to face with our dreams and goals, no matter what the roadblocks. You are an awesome woman of God and a true inspiration.

You can visit at Amy at My Heart My Home.

For more inspiration from people who have “been there, done that, and overcome life’s roadblocks” hop over to Debbie at Heart Choices. Today Debbie is featuring a mom of FIVE children who is dedicated to leaving a legacy of health and fitness to her children.