One of the keys to maintaining a well-balanced life is being ready to jump on the pendulum when it radically swings from one direction to the other.  The last two weeks have been this kind of extreme for me and my family.

My dad passed away Friday, June 30th.  Which, incidentally, was also the 19th anniversary of the death of my son.  The recent days have been a whirlwind of travel, bedside vigils, group texts with my six brothers and sisters and their spouses, funeral planning, greeting hundreds of people–many of whom I hadn’t seen in 30 years–weeping, remembering, laughing… 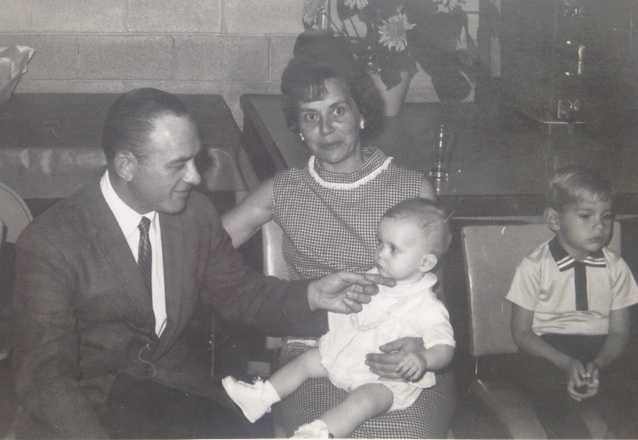 My dad was 92 when he died.  He lived a long, full, life.  I don’t even know how to encapsulate in a short post everything my dad was to me and the people who knew him.  How can someone summarize in a few words a life that spanned almost a century? 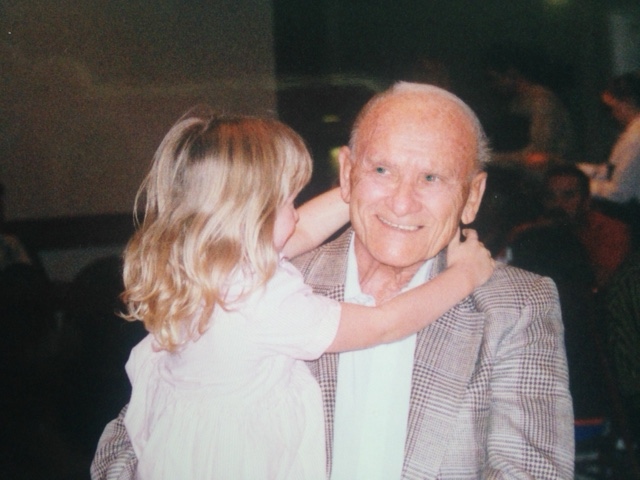 I had the honor of speaking at my Dad’s funeral. As soon as my dad passed away, these words flowed fluently from my mind onto paper.  I could hardly write quickly enough to capture them all. For those of you who never met him, this is the closest thing I can offer you as a snapshot of my Dad, Raymond Robert Trzcinski. 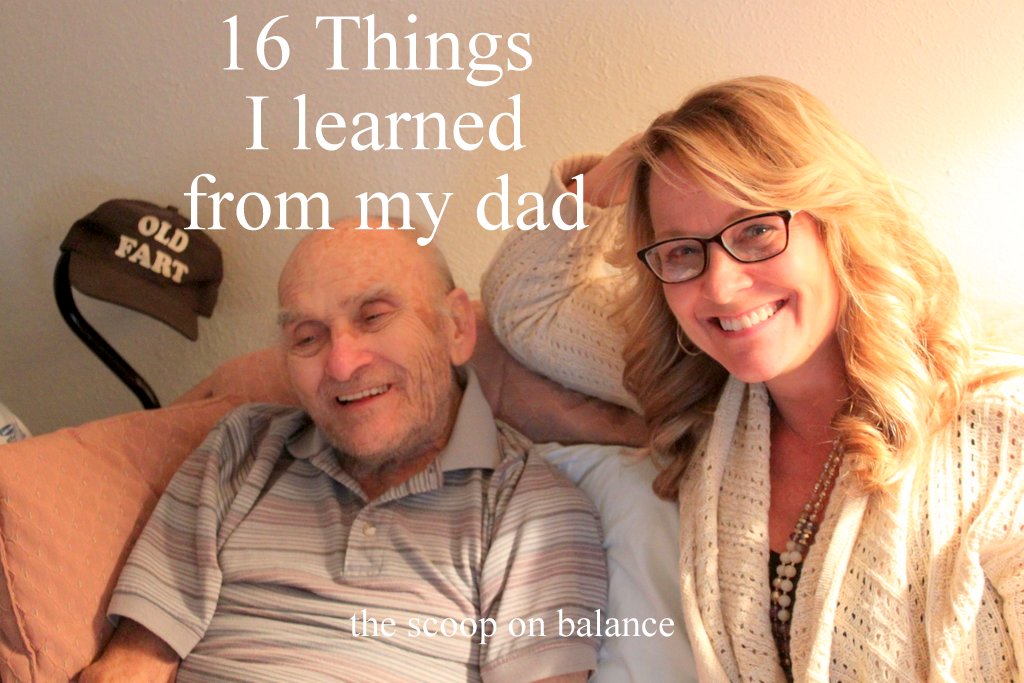 16 Things I Learned from My Dad

1. I learned how to grow, pick, and enjoy the perfect tomato.

2. I learned how to sing and dance in front of my kids—which I used to think was totally embarrassing, but now I know is totally awesome. I proudly carry on the legacy in my own home.

3. I learned boxer shorts are perfectly appropriate “lounge wear.” Especially when childhood friends are in the house. Which I also used to think was totally embarrassing—and still do, actually. I do NOT carry on that legacy in my home.

4. I learned to refrain from standing in front of an open refrigerator when I was looking for something to eat, and to turn off the lights when you leave a room. Also, to leave notes taped on the wall near light switches where necessary.

5. I learned to never, ever take for granted the privilege of receiving a good education. My dad was born to Polish immigrants, the youngest of eight children, raised during the Great Depression, forced to quit high school after 10th grade, so he could work to provide for his family after his father died. He was determined to write a different story for his seven children, and he did. The sacrifice my parents made to send us to private schools and pay for college for those of us who chose to attend is not lost on me.

6. I learned how to love my children’s spouses like my own children. I’m not there yet, but when the day comes for my children to choose spouses, I want to treat them as well as my Dad has treated our husbands and wives. I often joke with my husband that somewhere over the last 24 years of marriage, Dad elevated Jon to “favorite son” status, and I was demoted to “daughter-in-law.” Jon would agree. 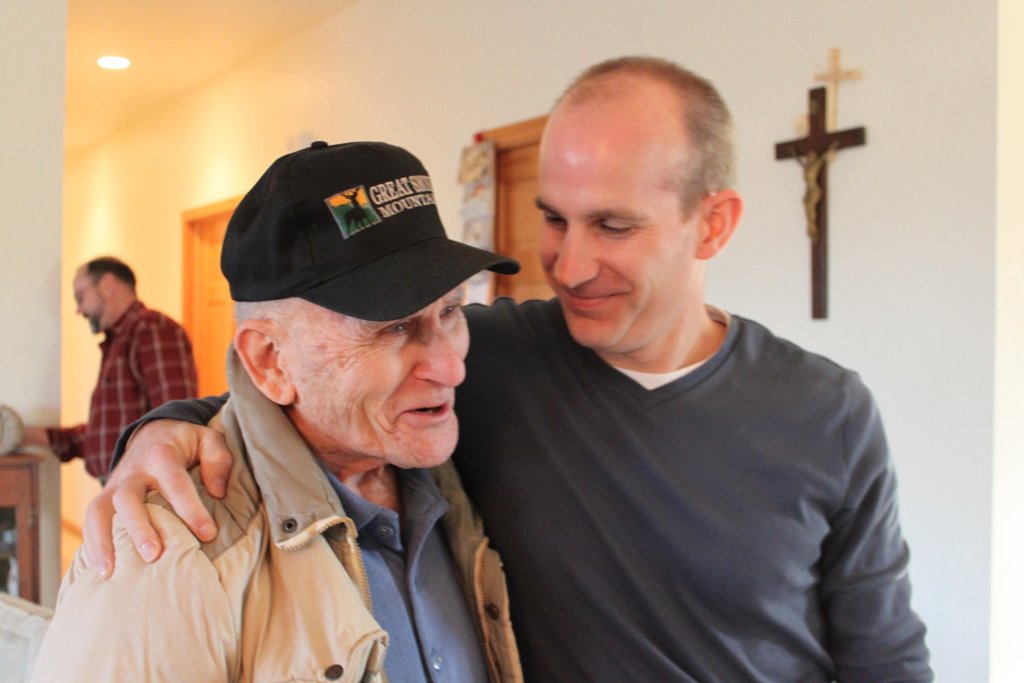 7. I learned how to be an outstanding grandparent. When we lost my son Noah and my mom within the same 5 ½ month period, my relationship with my dad deepened profoundly. My dad and I spent hours talking on the phone, sharing our grief. For years, he visited my baby’s gravesite every Wednesday, trimmed the grass by hand and lovingly placed fresh, seasonal decorations each week. As I was looking through photos to share at the visitation, what struck me the most is how many photos I have of Dad holding my kids, laughing with my kids, building snowmen, playing on the beach and at the pool, going to the zoo, sitting on the floor looking at books or playing with toys, and jumping in inflatable bounce houses—literally hundreds of photos of my dad having fun with my kids. I want to be a grandparent like that. 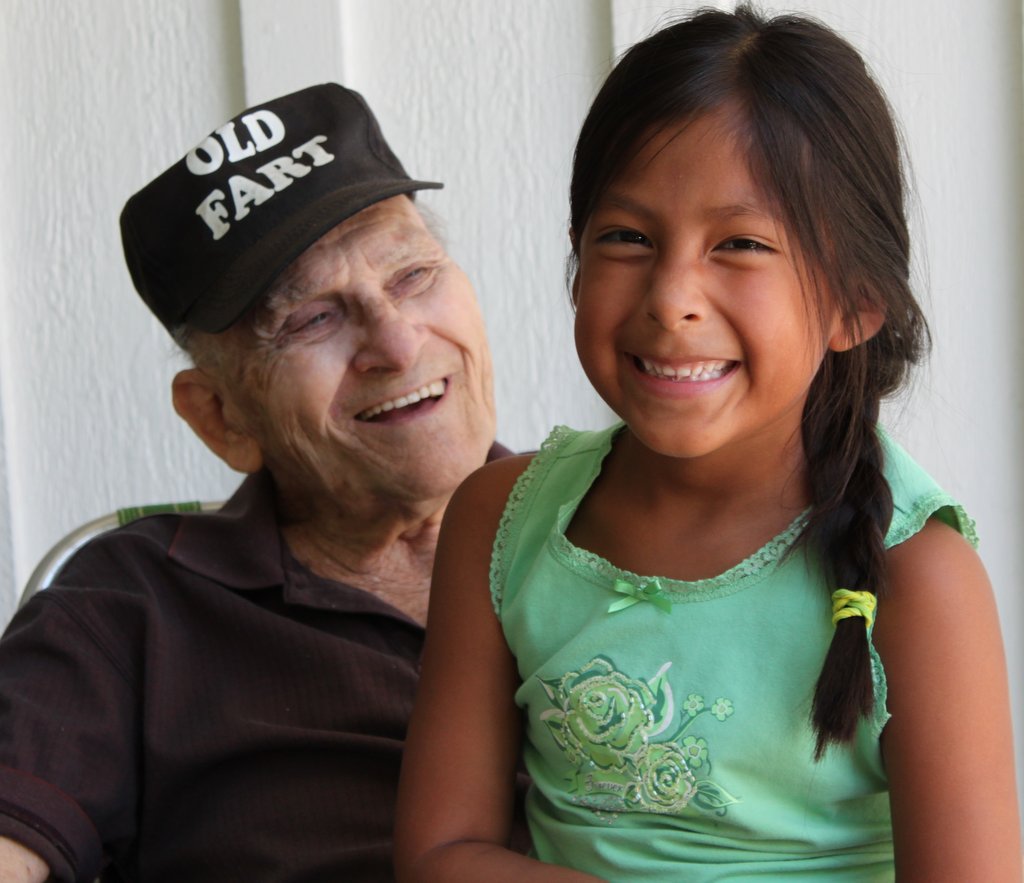 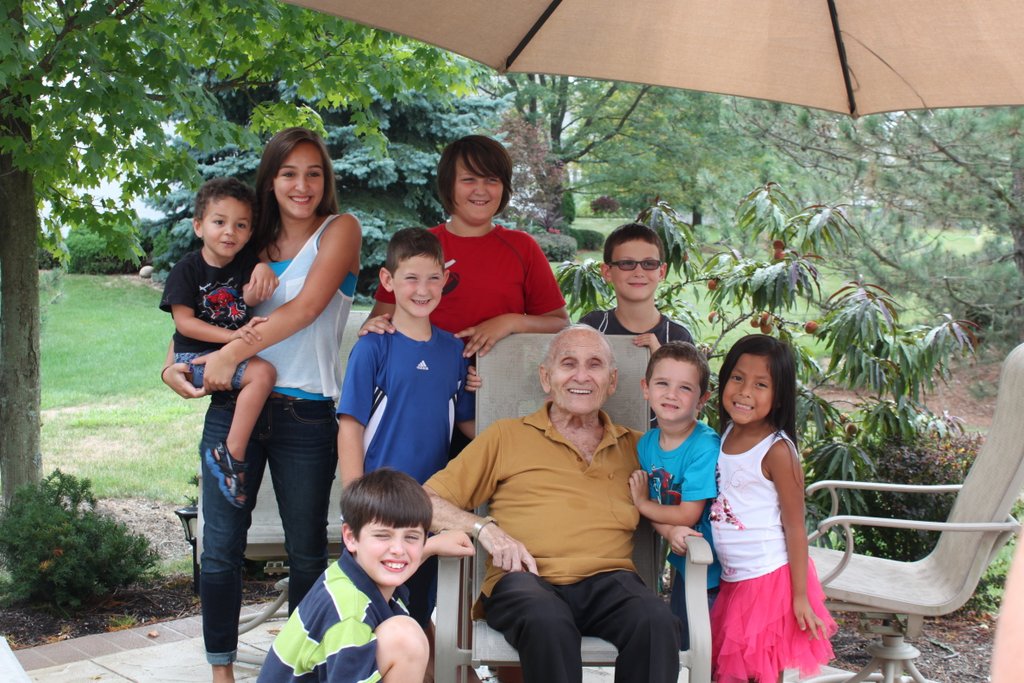 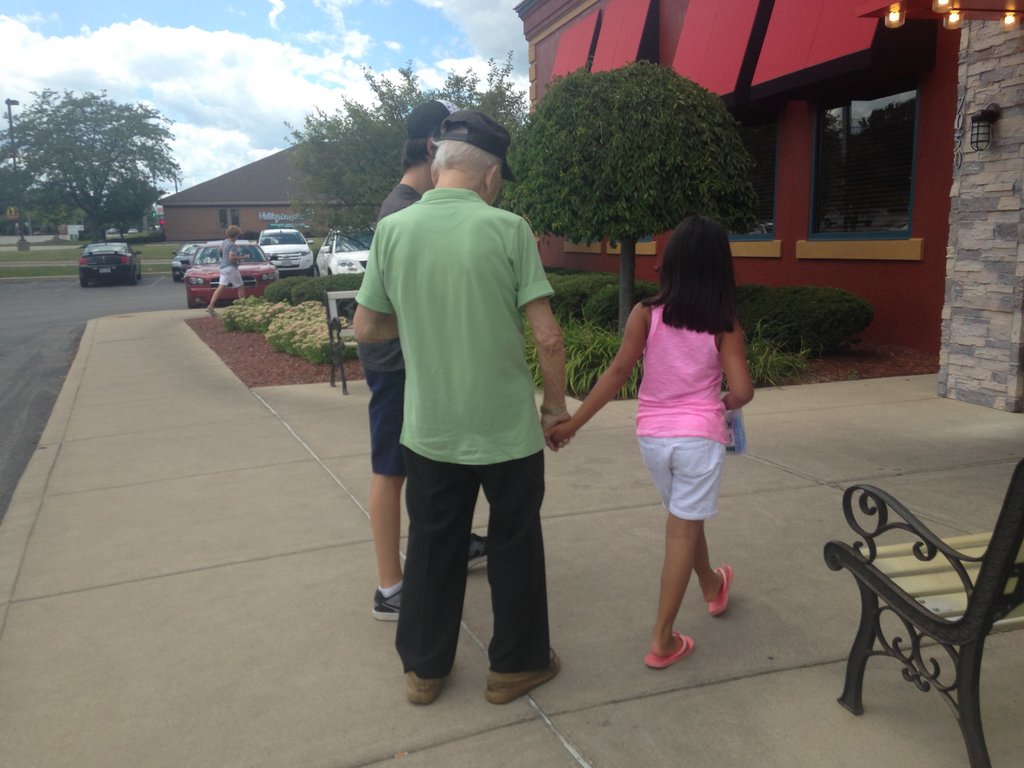 (The other thing that struck me after I looked through all the photos for the visitation is that Dad apparently did not own a shirt from 1940 to 1990.)

8. I learned the importance of physical fitness. My earliest memories are of my dad walking and swimming laps at Fort Firelands. My brothers remember him doing pushups in the hallway every day (probably because he hardly ever wore a shirt.) When I moved to Florida, dad and I would power walk together around the neighborhood, into his late 70s and early 80s. I want to be a mall-walker like my dad when I’m 80.

9. I learned how to show genuine appreciation when someone prepares a meal. Because I’ve lived away from Toledo for the last 21 years, my dad spent many weeks staying in my home when he’d come to visit. So, I had the opportunity to cook for him probably a hundred meals. He was so fun to cook for. No matter what I made, he would devour it, nod and say “mmmm,” and thank me multiple times. (Incidentally, he also taught me to serve dinner at the precise moment I said it would be ready, to burn his toast, and to serve the meal piping hot.) 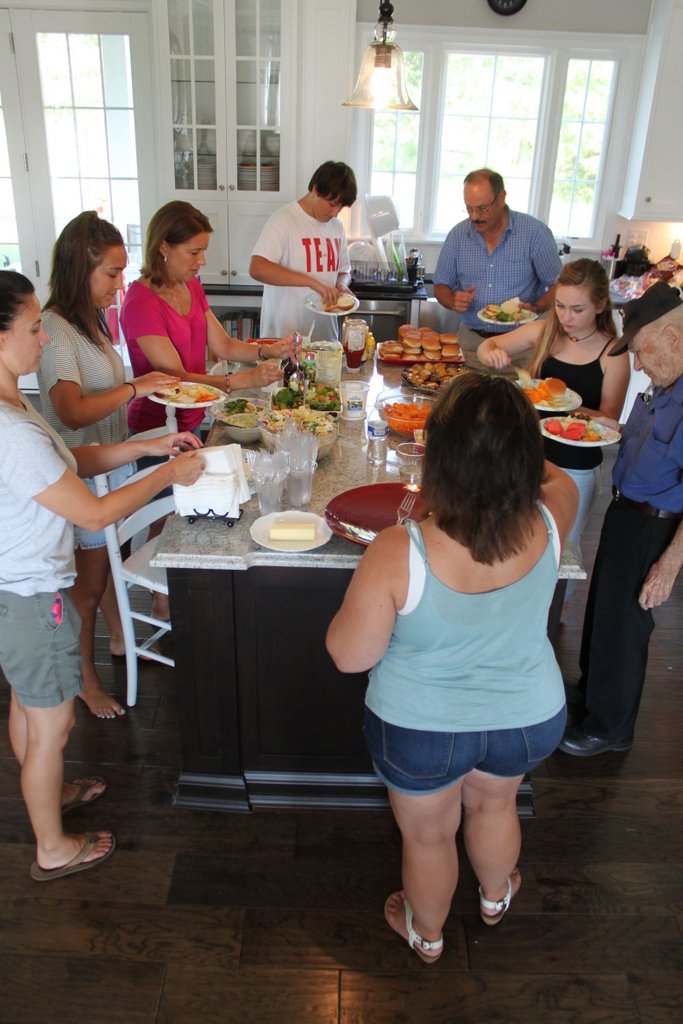 10. I learned how to drive a vehicle and how to take good care of my car. Dad was all about cars.

11. I learned family vacations are worth the time, the effort, and every penny. 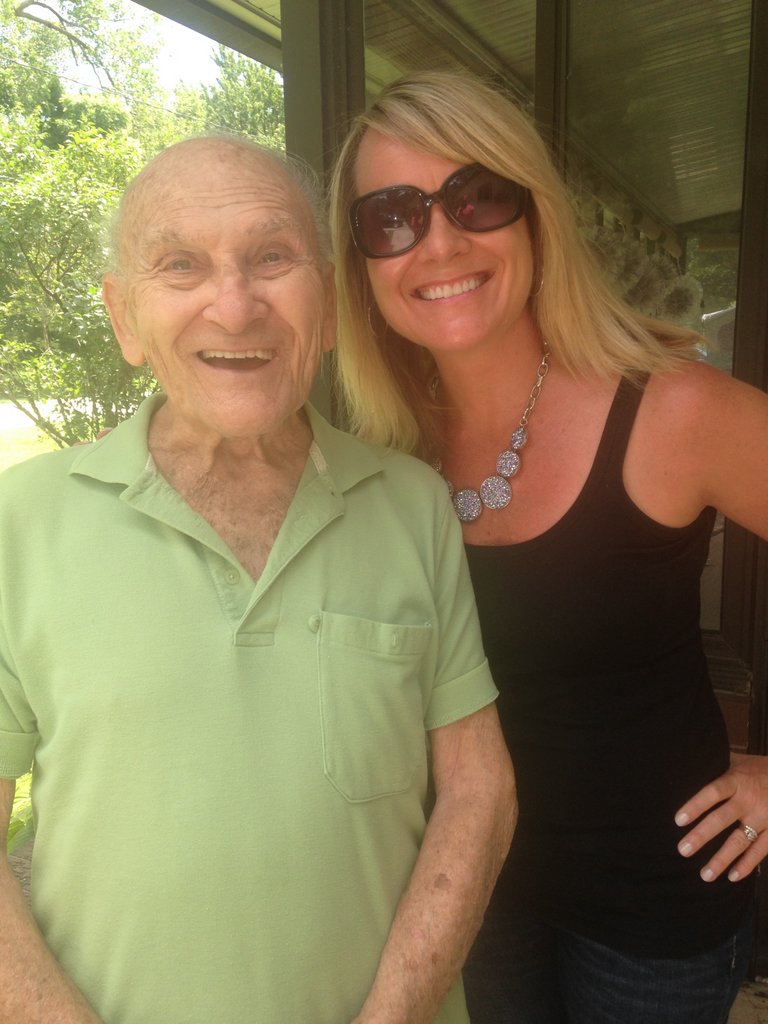 12. I learned a love for cartoons—Bugs Bunny, to be exact. Dad did a pretty good Pepe LePew imitation.

13. I learned to have a sense of humor. If you talk to the Trzcinski kids for longer than five minutes, you will hear the same wit and sarcasm flowing from each of us. That would be my dad. 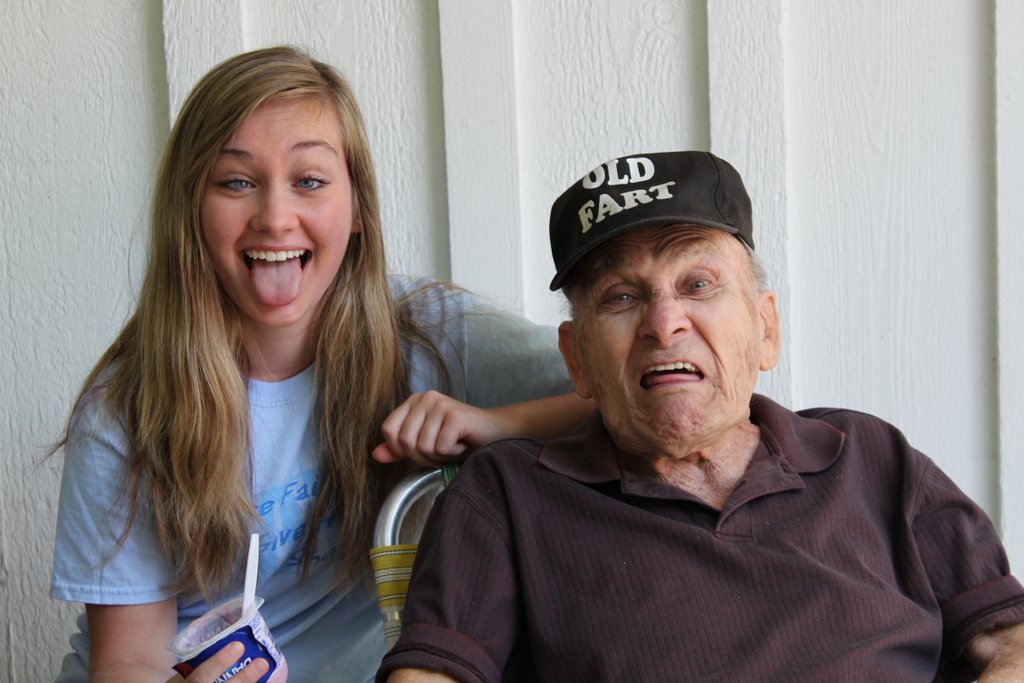 14. I learned to live debt-free. My dad did not only profess this value verbally, but he demonstrated it with his life—paying cash for every car he owned, and also his house. I think one of the proudest moments of his life was when he closed on his house on Moffat and wrote them a check from his savings rather than from a mortgage lender.

15. I learned a strong work ethic. My dad worked hard, often multiple jobs, to provide for his family. He was prompt, reliable, honest, and trustworthy. Even after he retired, he continued tending his garden, helping his neighbor do payroll for their business, and taking care of home and car maintenance himself. Everything he set his hand to do, he did it with excellence. 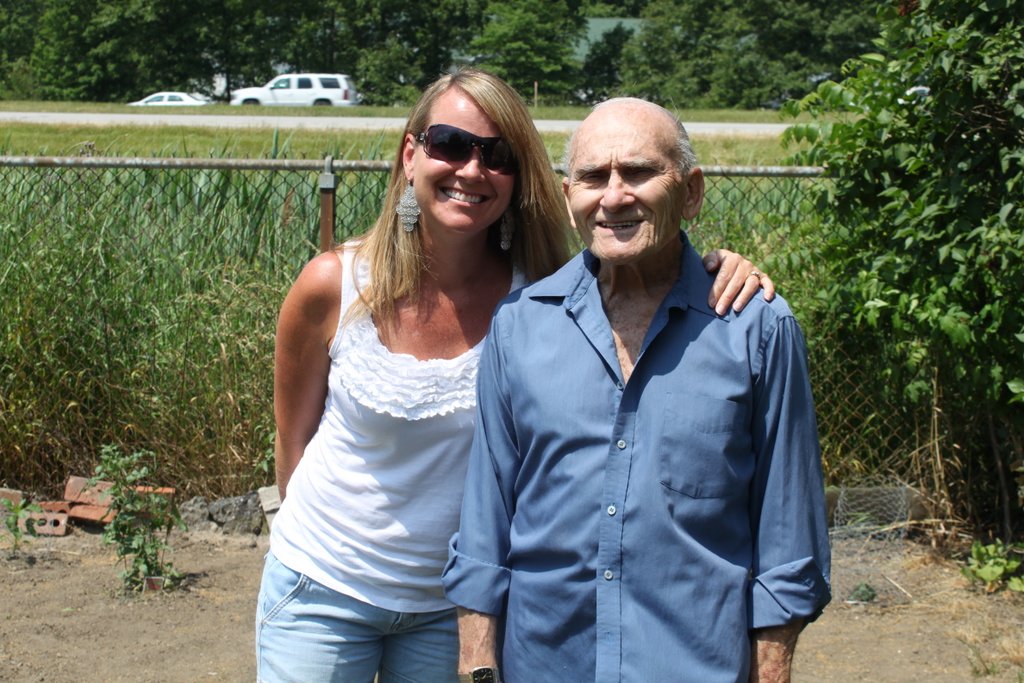 16. Most importantly, I learned contentment. When I was growing up, my parents did not have a bedroom because we had so many kids. They slept on couches in the living room. My dad kept his clothes in the hall linen closet, and my mom kept hers in the china cabinet in the dining room. I never thought this was weird, because my parents never made a big deal about it. In fact, my parents always told me we were rich. If you were to listen to my dad describe his house on Moffat, you would have thought he lived in a mansion over sprawling acres (which is actually an 1,100 sq ft ranch on 1/3 of an acre built in the 60s). He never strived for bigger and better. He was sincerely thankful for everything he had.

I last saw my dad the day before he passed away. He couldn’t talk at the time, but he was still coherent enough to be aware of his surroundings. I believe he knew the end was near and I believe he was ready to go. I imagine if I would have asked him where he was going and he could have responded, he would have said, “Susie Q, (that was what he called me) I’m going to see a man about a horse.”

When we were kids, those were code words for “I’m going dancing.”

I can’t wait to dance with you again, Dad. I love you. Thank you for being an outstanding father. 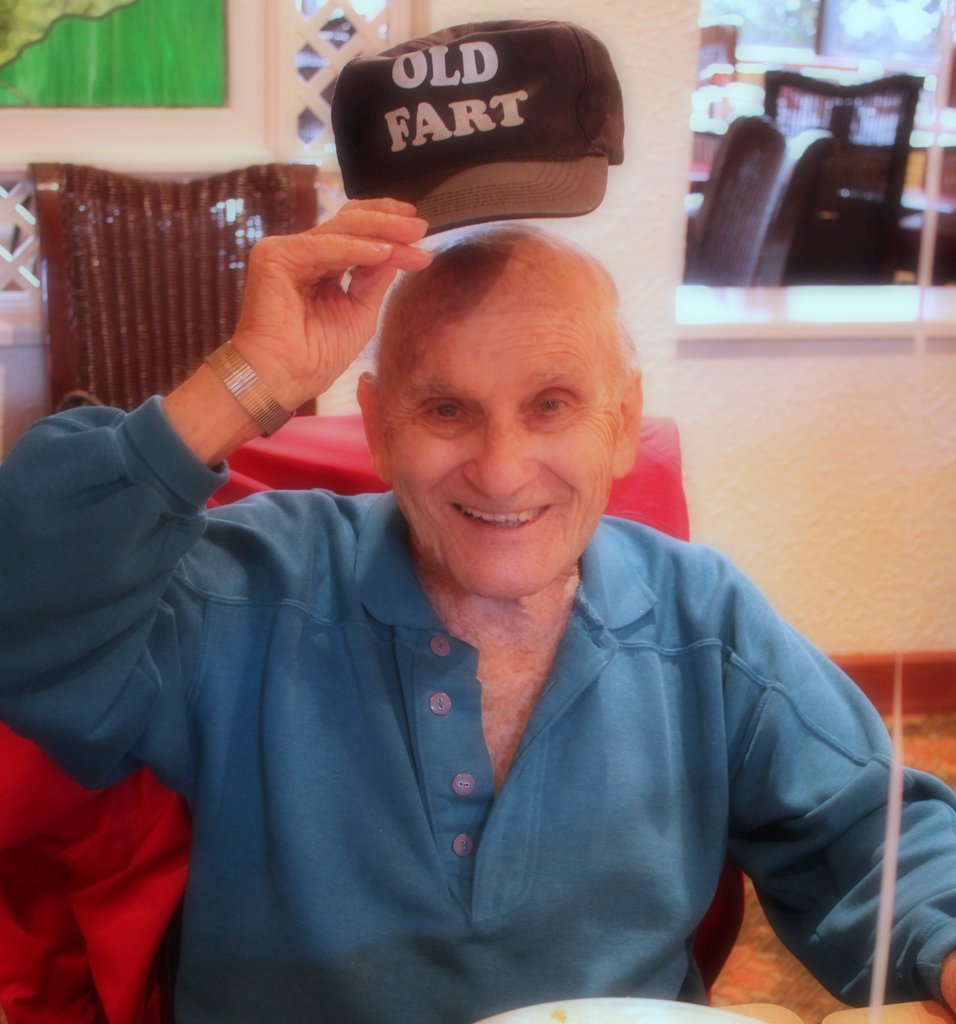 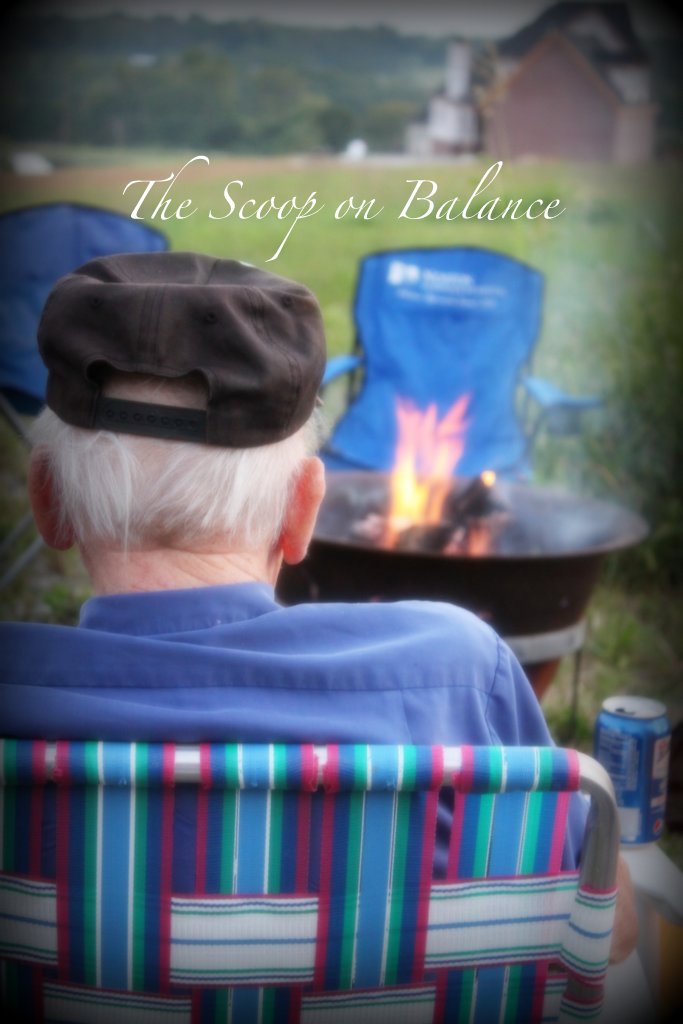