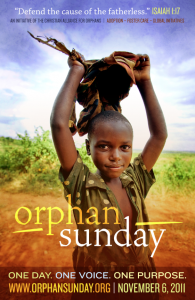 Yesterday was Orphan Sunday, and my pastor was kind enough to ask me and Jon to share a bit about our adoption experience. But rather than just tell our story, we wanted to encourage others to adopt. If you were there and heard our little schpeel (is that a real word?),  you are dismissed from this blog post. If not, here is what we said:

Nearly 81.5 million Americans have considered adopting a child. Maybe you’re one of them.  Yet, each year only an average of 125,00 children are adopted to American families.

We believe it’s partly due to the fact that there are a lot of adoption myths out there: people believe certain things about adoption that are inaccurate or simply not true. We understand the confusion, because we have walked that road: We are adoptive parents.

We have four children, 2 of them biological and 2 adopted. Our first son, Noah, passed away in 1998 at the age of 9 months. We also have a 12-year-old biological daughter, Rebekah, a 10-year-old domestically adopted son, Elijah, and an almost 5-year-old internationally adopted daughter, Elliana.

Myth #1: Adoption is outrageously expensive and out of reach for most families

Reality: First of all, remember that it costs money to have a biological child, too: Anywhere from $9,000 to $15,000 for an uncomplicated delivery. And that doesn’t count the cost of prenatal care, prenatal vitamins or birthing classes.

The cost of adoption varies greatly, depending upon the type of adoption and child you choose. The most expensive routes are usually international, because it involves travel, and domestic agency adoptions.

Generally, the more flexible you are, the less expensive it becomes. For example, a lot of people don’t realize that adoption through the state of Kentucky (and all states!) is free—and that the state reimburses you for the child’s medical expenses.

But even if you choose a more expensive route, there is financial help to offset the cost of adoption.

1. The Federal Adoption Tax credit. Currently, you will be reimbursed up to $13,170 from the federal government, once your adoption is finalized.

2. There are hundreds of grants available to families who qualify. I have a list of some of those, for anyone who is interested.

3. Many employers have adoption benefits.

4. If you are in the Military, there are adoption benefits available to you, too.

5. And there are also numerous creative ways to raise funds for your adoption–everything from garage sales to silent auctions to creative fund-raisers. I read of a couple who decided to run a marathon together and get sponsors…they raised $20,000! All kinds of people have a heart for adoption, but are not in a position to adopt a child themselves. They are looking for places to sow their finances.

Myth #2: A biological parent can come to take an adopted child back.

Reality: Cases of birth parents obtaining custody after adoption are extremely rare and are exaggerated by the media. Yet, this is a fear for about 2/3 of the people considering adoption.

Because of very strong adoption laws, biological parents have no way to gain back custody of the child or children once their parental rights are terminated. In international adoption, these cases are practically unheard of. Namely, because parental rights are usually terminated before a child becomes eligible for adoption.

In the state of Kentucky, consent papers can signed immediately after birth and can be filed 72 hours later. Parental rights are terminated 20 days after the consent papers are filed. Again, once parental rights are terminated, the birth parents cannot come back—they are irrevocable. In Kentucky, that would mean as soon as 23 days after the birth of the baby. These waiting periods vary from state to state.

Myth #3: An adoptive parent cannot love a child as much as he or she will love a biological child.

Reality: Love is not based on biology. Many loving relationships are between individuals who are not related to each other, such as husbands and wives. This was a very real fear for Jon when we adopted Elijah. Things changed for him after he sought counsel with his own father–also an adoptive parent (Jon’s sister is adopted). When Jon said he didn’t know how he could love an adopted boy like his own son, Jon’s dad wisely said, “Well, you better figure it out, because you are the only father he will have.” Once that reality hit Jon–that he was Elijah’s father–the love flowed naturally from that.

Ten years and two adopted kids later, we can both say without reservation the love we have for our biological kids vs. our adopted kids is no different.

Myth #4: You have to be perfect to pass the home study.

Reality: If that were true, we would not be adoptive parents. No one would.

Yes, it is true that the home study process is very rigorous and time-consuming. But unless you have a criminal background or you are homeless or jobless or have an illness that precludes you from carrying out your parental duties, a social worker will not reject you. It won’t matter if there are dishes in the sink or if your walls need to be painted.  Social workers want to find loving, stable homes for adoptable children…not perfect ones.

Myth #5: It’s too risky to adopt because so much can go wrong during the process.

Reality: Certainly, there could be roadblocks. When we adopted Elliana, the entire Guatemalan adoption program shut down, just days before we were scheduled to get her. We had to call our State Senators and get foreign embassies involved. But with Elijah’s adoption, there were no glitches whatsoever. It was very smooth. I was in the hospital room when he was born and took him home the next day.

Statistics show that approximately 29% of adoptive parents experienced what they call a “false start.” Meaning, they started down a road to adopt a certain child, and that adoption fell through for one reason or another.

Compare that to this statistic: Sources vary, but many estimate that approximately 1 in 4 pregnancies end in miscarriage; and some estimates are as high as 1 in 3. If you include loss that occurs before a positive pregnancy test, some estimate that 40% of all conceptions result in loss. So, it could actually be argued that adoption is less risky than pregnancy!

Clearly, we love adoption and want to help in any way we can. Please don’t make such an important decision based on fear or myths.  Do your homework.  If you have any questions, concerns, need support or you just want prayer, we are always available to discuss adoption with you. Just leave a comment or send a private e-mail (click on “contact” tab at top of blog for my e-mail.)

Related Posts: I have written a series on adoption where I discuss all of these myths in greater detail. Click the “adoption” tab at the top of the blog or click here.