On June 16, 1978, the highest grossing movie of that year was released. This motion picture would go on to receive five Golden Globe nominations, while it’s soundtrack alone, along with several of it’s singles, would sail to number one all over the world.

It would also go on to make two moderately well-known celebrities house-hold names: 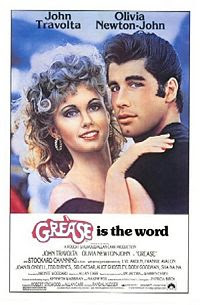 Mom said the movie was not appropriate for a nine-year-old.

Mom said the message of the movie was wrong, namely that the “good girl” had to turn “bad” to get the boy.

So off to the movie they went. Mom and Nine-year-old-Sandy-from-Toledo. Mom watched with a discerning eye. But Sandy…Sandy was mesmerized. Sandy was enthralled. Sandy was captivated.

Sandy became obsessed with All Things Grease. Sandy bought the soundtrack and memorized every word of every song. Sandy bought Grease books and Grease magazines. Sandy became an expert at drawing the Grease logo on her chalkboard. Sandy secretly watched Grease all twelve times on Showtime at her best friend’s house, because Sandy from Toledo didn’t have cable.

Sandy from Toledo eventually grew up, got married, had babies (one of which is now a girl, age nine) and became Sandy from Kentucky. The movie, the soundtrack and the starlet that defined her during her “tween” years eventually faded into her past, as nothing more than one of many tiles in the mosaic of her life.

And then Sandy from Kentucky got THE E-MAIL….

Sandy from Kentucky’s husband sent what he thought was a simple e-mail: “Hi honey. I’ve got a couple tickets to see Olivia Newton-John on Saturday. You interested?”

And then it happened. That night, not only did Sandy from Toledo, now Sandy from Kentucky, get to see Sandy from Grease sing in concert–which in and of itself would have been a dream come true, but…well, let me just show you. 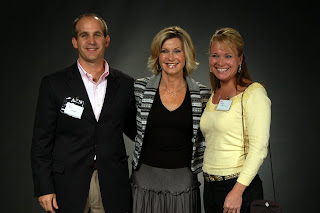 That’s right!!!! The two Sandy’s actually touched!!!! Their eyes met! Sandy from Toledo/Kentucky blurted out something stupid like, “I’ve always loved you.”

Seriously. I said that.

And Sandy from Grease, looked at Sandy from Toledo/Kentucky in sort of a scared, confused way.

But never mind that…Sandy from Toledo/Kentucky for a few hours, became, once again, that little nine-year-old girl…mesmerized, enthralled, captivated and awestruck.

Life has a way of bringing us full circle, eh?

Pretty amazing that a 39 year-old woman could become downright giddy at the thought of meeting another woman. A normal human woman, whose career choice happens to include

acting like someone she is not,
saying words that are not her own,
in make-up and clothing she did not choose
and hair she did not curl
singing with, dancing with and making out with Danny–who is really John Travolta (well, that’s kind of cool, actually).

Isn’t it strange how we can make such a HUGE deal about just another person, but make such a little deal about God? We all do it. It’s like it’s encoded in our DNA or something. Why is that? Just today, as I was thinking about how I needed to pray and prepare to write this very post, I caught myself telling God I would get to my prayer time after I make my bed and pick up the house a bit.

I wouldn’t even say that to Sandy from Grease if she were sitting in my kitchen waiting for me.

And neither would you.

The King of Kings and Lord of Lords is beckoning me to steal away and commune alone with Him while my baby naps…and I’m thinking about fluffing my pillows????????????

What is wrong with us?

I know you are hoping that I answer that question. But I don’t really have a good answer. Maybe it’s just the pressure of the urgent pulling at us. It may be our Enemy constantly distracting us from relationship with God. Or perhaps we just don’t really grasp Whom it is we serve.

Last summer I read a fantastic book called, “I am not but I know I AM,” by Louie Giglio. Louie has a gift for helping us grasp the bigness and the greatness of God. I, personally feel as though I don’t hear God speak as much as I could simply because I don’t revere Him and His Majesty with the depth to which He is calling me. I don’t approach Him with awe and reverence. I don’t steal away at the very first opportunity to talk to Him…to worship Him.

I want to get there. I really, really do. Don’t you?

He sits enthroned above the circle of the earth, and its people are like grasshoppers. He stretches out the heavens like a canopy, and spreads them out like a tent to live in.
“To whom will you compare me? Or who is my equal?” says the Holy One. Lift your eyes and look to the heavens: Who created all these? He who brings out the starry host one by one, and calls them each by name. Because of his great power and mighty strength, not one of them is missing. (Isaiah 40:22, 25-26)

If you sense the same thing in your life, maybe this excerpt from Gigilio’s book will help move you to that place:

“God is more massive than our wildest imagination, bigger than the biggest words we have to describe Him. And He’s doing good today–sustaining galaxies, holding every star in place, stewarding the seemingly chaotic events of earth to His conclusion within His great story.

God is constant. He blinks and a lifetime comes and goes. To Him one day is like a thousand years and a thousand years like one day. All of human history could be written on His fingernail, with plenty of room left over for more.

And God is doing well today, thank you. He has no dilemmas. No quandaries. No counselors. No shortages. No rivals. No fears. No cracks. No worries. He is self-existent, self-contained, self-perpetuated, self-powered, and self-aware. In other words, He’s God and He knows it.

He is timeless. Ageless. Changeless. Always.

After an eternity of being God, He shows no signs of wear and tear. He has no needs…

God does whatever He wants. His purposes are a sure thing. There’s no stopping Him. No containing Him. No refuting Him. No cutting Him off at the pass. No short-circuiting His agenda. God is in control. He sends forth lightening from His storehouse, He breathes out the wind, waters the earth, raises up rulers, directs the course of nations, births life, ordains death, and, in the midst of it all, still has time to be intimately acquainted with the everyday affairs of everyone on the planet.

God knows everything about everything and everyone. His eyes race back and forth across the cosmos faster than we can scan the words on this page…

God’s rule and reign are unrivaled in history and eternity. He sits on an everlasting throne. His Kingdom has no end…He has never feared a power struggle or a hostile takeover. He doesn’t have to watch His back. He has no equal. No peer. No competition.

It makes perfect sense that His name should be I AM.”

And to think I’ve gotten more excited about meeting Olivia Newton-John than I have the GREAT I AM.

(No offense, Olivia, if you happen across my blog. You are simply lovely, quite talented, and look amazing for your age).

And by the way, on the other side of this “full circle”, I can see clearly that Mom was totally right about the movie. I would, like, NEVER let my nine-year-old see Grease! I’m so SURE!