Can you even imagine something like this happening to you?

“Now an angel of the Lord said to Philip, “Go south to the road—the desert road—that goes down from Jerusalem to Gaza.”

So he started out, and on his way he met an Ethiopian eunuch, an important official in charge of all the treasury of Candace, queen of the Ethiopians. This man had gone to Jerusalem to worship, and on his way home was sitting in his chariot reading the book of Isaiah the prophet.

The Spirit told Philip, “Go to that chariot and stay near it.”

Then Philip ran up to the chariot and heard the man reading Isaiah the prophet. “Do you understand what you are reading?” Philip asked.

“How can I,” he said, “unless someone explains it to me?” So he invited Philip to come up and sit with him.

The eunuch was reading this passage of Scripture: “He was led like a sheep to the slaughter, and as a lamb before the shearer is silent, so he did not open his mouth. In his humiliation he was deprived of justice. Who can speak of his descendants? For his life was taken from the earth.”

The eunuch asked Philip, “Tell me, please, who is the prophet talking about, himself or someone else?”

Then Philip began with that very passage of Scripture and told him the good news about Jesus.

As they traveled along the road, they came to some water and the eunuch said, “Look, here is water. Why shouldn’t I be baptized?”And he gave orders to stop the chariot. Then both Philip and the eunuch went down into the water and Philip baptized him. When they came up out of the water, the Spirit of the Lord suddenly took Philip away, and the eunuch did not see him again, but went on his way rejoicing.”

I mean, one minute you’re minding your own business walking your dog through the park and the next minute God speaks to you and you find yourself jogging next to a cyclist, telling him about Jesus and baptizing him in the pond? And then as you come up out of the pond, the Spirit of God suddenly and supernaturally takes you (and your dog, I suppose) away?

I often wonder how I’m supposed to get from where I am now (struggling and striving to hear God’s voice) to where Philip was (God-directed, God-transported.)

One of the reasons I started this blog was that I suspected many of you wonder the same thing about yourself. Like me, your struggle is not so much with willingness to obey God’s voice, but rather the question of whether you’re hearing God at all. You would surely obey whatever God told you to do, if you could be certain it was God telling you.

Philip heard God clearly. I want to be like Philip.

At this time history, there was great persecution against the church and the Christians were scattered, preaching the word wherever they went. And there’s our man Philip, down in Samaria proclaiming Christ there (Acts 8:1-5). Alone, with wide-spread persecution in the midst of evil spirits and sorcerers, Philip was boldly proclaiming Jesus. That’s where we find Philip when God speaks to him.

Then, after the encounter with the Ethiopian eunich, the Spirit of God supernaturally transports Philip over thirty miles away to another city, where Philip does what? Preaches the gospel in all the towns as he continued to travel.

Well, I suppose if I want a Philip-exerience, I should develop some Philip-habits. Let’s take a look at what those might be.

Thank you so much for each person who reads this blog and who longs to hear Your voice. May we all be able to say, “I hear the voice of the Good Sheperd and the voice of a stranger I will not follow.”

Please help us to recognize Your voice as we spend our days proclaiming You to everyone we encounter.

Please help us to obey You immediately and joyfully, without questioning, arguing, rationalizing or complaining. 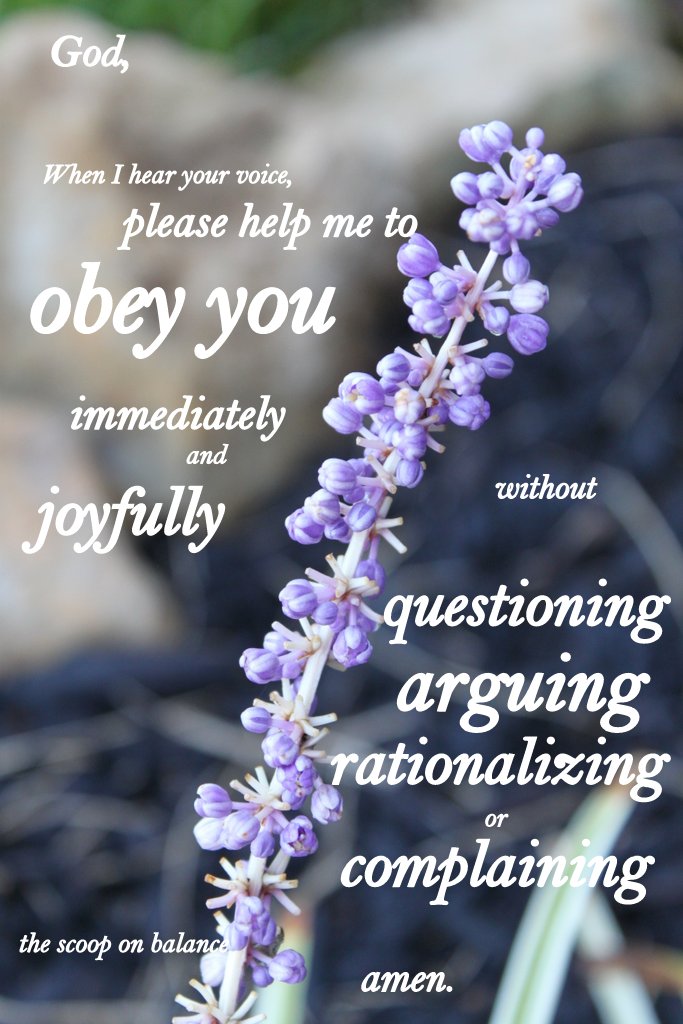 Give us ears to hear not only You, but also those who are lost and hurting all around us. I speak against the Enemy’s plan to distract us from Your work this week. I pray that we would be alert to the opporunties to share Christ with others.

And finally, I pray that this little blog would accomplish all that You desire for it to accomplish…and that You would receive all the glory and honor and praise for any good that comes out of it.

In Jesus Name, I pray.