Last week I posted a Facebook status that read: “Confessions of a real mom: sometimes I pretend to need to use the restroom so I can send a text without someone talking to me.”

What followed was a thread of 31 hilarious confessions from my mom friends (which, curiously, contained a disproportionate number of references to wine). And that thread reminded me of one of my all-time favorite blog posts. Here, I lay it all out there, people. Feeling bad about your parenting? You’ll feel much better after reading this. 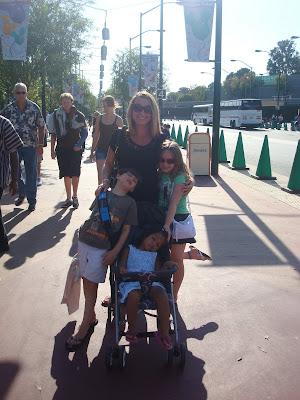 You know how sometimes when you’re at Walmart and you see another parent totally freak out on their kid in the toy aisle over something really minor? And you know how when this happens, rather than offering your sympathy or support, you secretly judge the other parent and decide they sort of stink at parenting? And you know how you then, with your best calm and joyful parenting skills, playfully tousle your child’s hair and lean in to give them a great big kiss? And you know how you make sure you do this in the direct line of vision of the Bad Parent who just freaked out on their poor innocent kid, hoping the Bad Parent will learn a thing or two from you, the Superior Parent? And you know how you go about your day, feeling like a Superior Parent, because you would never, ever freak out on your kid in the Walmart toy aisle?

Well, today is YOUR lucky day. Today, I’m giving you the opportunity—without having to go to Walmart or leave the privacy of your laptop—to deem yourself the Superior Parent. All at my expense, of course.

I’m convinced one of the reasons God gave me children was to keep me humble. Just when I proclaim to the world that I will NEVER do thus and so, life provides me a perfect opportunity to do something ten times worse. If these things don’t make you feel better about your own parenting flubs, then at least I know they will provide great therapy fodder for my kids when they’re thirty.

Great Moment in Parenting, Act One: One time when Rebekah was about two, I took her to Michaels craft store to pick up some supplies to make Daddy an adorable painted shirt for Father’s Day. 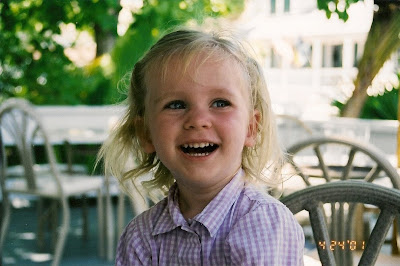 Rebekah never did like to shop much as a small child, but this day she was just impossible. As I browsed the paints, she cried and whined. As I searched for a t-shirt, she threw herself on the floor and screamed. As her tantrum escalated, so did my heart rate. The more I pleaded, begged and threatened, the bigger her fit grew. That’s it, I’m done. With both of us in complete hysteria, I abandoned my cart, yanked her up from the floor, marched out to the car, and angrily buckled her in her car seat. For the entire ten-minute ride home, I proceeded to yell at my disobedient and defiant two-year-old, telling her how upset I was that she would not let me shop for Daddy’s present. I was crying. She was crying. I was screaming, she was screaming. I was livid. And she was…sick.When I got home, I removed her from the seat and noticed she felt very warm. Her temperature was 103.5. She was ill and in bed for several days.

Lesson Learned: Before you punish your kid, check for signs of illness.

Great Moment in Parenting, Act Two: Crying children bother me less and less with each passing year. Kids cry. That’s a fact of life. If you cater to them every time they cry, they’ll think they can manipulate you with tears, right? So, I’ve learned to completely ignore crying most of the time. In fact, when Rebekah was three-years-old and Elijah was about one-and-a half, they were playing in our dining room while Jon and I stood in the kitchen—about twenty feet away—trying to have a conversation. At that age, Elijah screamed and cried every time Rebekah looked at him the wrong way—which was pretty much all the time. So, we just learned to talk over the crying—pretty much all the time. On this particular day, the crying went on and on and on. It wasn’t the “I’m hurt” cry, so we just kept talking. And talking. And talking. Until finally after about ten minutes or so, we decided we better walk into the next room and separate the two of them. Rebekah was nowhere to be found. Elijah, however, had pushed through the screen of the first story dining room window. He was hanging draped over the windowsill with his face on the concrete outside. He was stuck and couldn’t get up. And he had a big abrasion on his forehead and black eye. 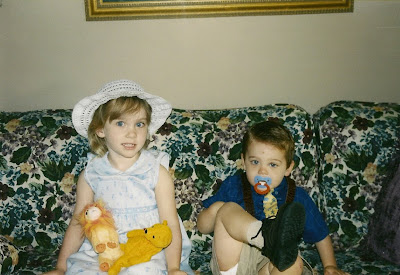 Oh, and it was the day before Easter.

Lesson Learned: Before you ignore a cry, be certain your child isn’t hanging out a window.

Great Moment in Parenting, Act Three: One time after a Wednesday night service at church, Jon and I went up to our pastor’s office to chat. Elijah was about three and Rebekah was five. Our pastor has four kids of his own, so with the pastor’s blessing, we just let the six of them run around in the halls while we talked. The kids happily played, running in and out of the offices and up and down the halls.

After about thirty minutes, we realized in all the running in and out, we hadn’t seen Elijah in quite some time. We asked the other kids where Elijah was.

We immediately started searching the dark building, which was now empty and locked down for the night. In the distance, we heard a faint little cry. “Mommmmmyyyyy!” but couldn’t figure out from what room it was coming. After several minutes, we finally found Elijah outside in the dark, barefoot, frightened to death and pounding on the door, saying, “Mommy! Daddy! Save me!!! Where are you?????? Why are you doing this to me?” For some reason, he thought we went outside, so he went out to find us. And the door locked behind him.

Lesson Learned: If you accidentally lock your 3 year old out of church at night, alone, with no shoes on, the least you can do is take him to Target on the way home and let him pick out whatever he wants from the toy aisle to alleviate your Mommy Guilt.

Great Moment in Parenting, Act Four: Elijah eventually learned that crying gets him nowhere, because somewhere along the line, he pretty much stopped. So much so, that he wouldn’t even tell me if he was hungry or wet. In fact, one particularly busy morning, I was extremely overwhelmed with housework. I had spent the entire day cleaning, doing laundry and laundry and laundry. And cleaning. As I was driving to pick up Rebekah from kindergarten at 2:30 pm, I was thinking about how I had been so busy, that I had not even stopped to eat or shower. GASP!!!!! Because I had not eaten or showered, I had also not fed or changed Elijah! Aaahhhhhhhh! Yes, it was 2:30 pm and he was still in his pj’s and pull-up from the night before, and had consumed nothing but juice all day.

Lesson Learned: Kids need to eat, even if you don’t.

Great Moment in Parenting, Act Five: I potty trained Rebekah successfully in one week. Easy peasy lemon squeezy. I thought I was the potty-training queen. What’s the big deal? Why do parents dread this? Just put up a potty chart, buy a few dollar store toys, and you’re golden. And then I tried to potty train Elijah. A full year. That’s right. Age three to age four. Twelve full months, baby. When people used to say to me, “Don’t worry, he won’t go to college in diapers.” I’d think, “I’m not so sure about that.” He simply didn’t care if he was soiled. And if I stripped him naked, he’d just go on the floor, and continue playing. (Maybe it was the trauma of getting locked out of the church at night.) (Or the whole hanging-out-of-the-window incident.)

In that year, I broke every single potty training rule. All the things the experts tell you not to do? I did them. Every last one of them. I was so frustrated. One time, in complete and total desperation, I took away all his most beloved and prized possessions. The only things he played with every single day. I took away his trains! I told him he could earn them back one at a time if he went on the potty.

I will never forget the look of despair, horror and confusion on his sweet little face as I carried the boxes of trains out of his bedroom. He cried and begged…anything but the trains.

I went in my room and bawled like a baby. I felt I had no choice but to pull out the big guns.

And after all the drama, Operation Potty-Train didn’t even work! He still soiled his pants–but had none of his favorite toys, for weeks.

Lesson Learned: Kids will go on the potty when they are good and ready, and not a moment before.

(Edited to add: Elijah is 12 now and totally goes on the potty. At least NEAR the potty. Hang in there, Moms!)

Great Moments in Parenting, Act Six: Can you stand one more Elijah story? Last year at the beginning of the summer, Rebekah and Elijah decided to have a swing-jumping contest. I’m all for swing jumping. I have great memories of such contests as a child, and I was quite good at it. So when the kids started jumping, I got excited. In my best cheerleader enthusiasm, I encouraged the kids to swing high and jump long. They did. Elijah jumped so high and long that he broke his wrist. Eight weeks in the summer with a cast. 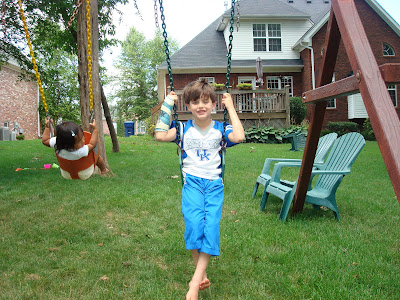 Lesson Learned: If you encourage your kid to do something dangerous, resulting in a broken bone in the summer time, make sure you splurge on the waterproof cast so at least he can still swim.

Great Moments in Parenting: Act Seven: And just so you know that Elijah and Rebekah aren’t the only kids to fall victim to my faulty parenting skills, a few months ago I discovered the skin on Elliana’s scalp flaking. It was sort of crusty and peeling, and kind of gross. Every day I when I scratched her scalp, I’d flake some more skin off. 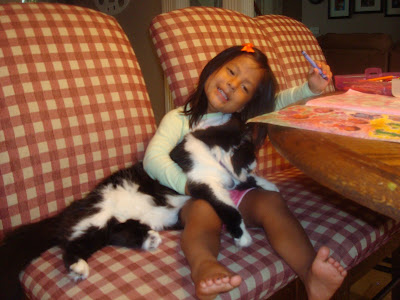 Uh oh, a skin condition. Cradle cap at age two? I’ve never heard of that. Maybe eczema? Hmmm…what could it be? Better make a doctor’s appointment. It stayed there for almost a week until…

I bathed her and washed her hair.