You guys. It has been over ten months since I wrote something funny on this blog. I just looked through my last year of posts and I’ve been all, “Oh my gosh, I’m so BUSY and DISTRACTED and need to get off the INTERNET!” And before that, I did the much-needed, but not-at-all-funny series, “Exposing Lies Moms Believe.” And then I wrote a bunch of heavy stuff about raising teens and being tired and Mean Kids. There were a few posts with pictures of clutter and garbage.

It looks like I’m walking around with a shroud, day and night, all sad and contemplative and stuff.

(Unless shroud is fancy for “headband” and “yoga pants” then, okay. I will own that.)

Well, the depressing cycle ends TODAY. I am armed with a giant mug of coffee and two hours to write. I write so much better when I’m full of caffeine.

1. I made some changes to my blog yesterday. I revamped my navigation bar (it’s still under construction, but if you are reading this by email,  you can go to the blog and click around and see what’s new). And I plan to get rid of all those categories in the sidebar. I don’t find it conducive for easy blog navigation, do you?

But the major change I made is that after nearly seven years of blogging, I FINALLY put some ads on my site. You probably wouldn’t even notice if I hadn’t just blurted it out.  If you are on the blog, look right about here——————————->

For the first few years of blogging, I kept an ad-free blog as a matter of principle. I believed that littering up my blog with a bunch of ads was selling out. However, after seeing several bloggers do ads tastefully, I realized it was possible place ads without selling out.

So then, I refrained from placing ads for sheer lack of knowledge and time to do so.

(Ironically, the email service I use for my blog subscriptions puts an ad at the bottom of every email that comes from me—maybe you’ve noticed. I don’t get paid a dime for those. In fact, I have to pay Google to have them removed. Which I won’t, as a matter of principle. And also, sheer lack of knowledge.)

So, anyway, after reading about yet another blogger who makes a full time income doing what I’ve been doing for free, I decided to bite the bullet, plop some ads on my blog, and see what happens—because someone’s gotta pay for all the coffee I need to write these posts, right?

The struggle is real.

You won’t believe this, but just from the three ads I placed on there yesterday, I’ve already made $0.76!!!! (That’s seventy-six cents).

Half the world survives on less that $2.50 a day. So, this is a full-time income SOMEWHERE.

2. I’m simply dumbfounded by the amount of stuff we STILL have in our house after DeClutter 2014: No Drawer Left Behind. I seriously touched and sorted every drawer, closet, cabinet and shelf in our house last year, in anticipation for the upcoming move. 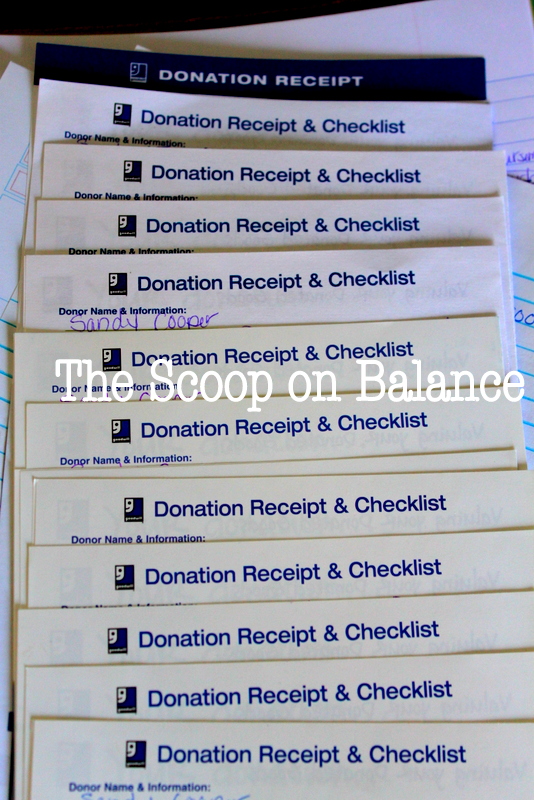 Each of these donation receipts represents a carload of stuff I dropped off at Goodwill. That’s 13 CARLOADS of stuff! I lost count of the number of additional garbage bags we generated, but it had to be 20 or 30 or 10,000.  Plus, we left big stuff at the curb.  And we also sold several items of furniture on Craig’s List.  And I gave lots of things to neighbors and friends.  Yet, still.  So much stuff.

Anyway, Sunday, I tackled the scariest place in my home: the storage room. Apparently, the clutter we stored in there the last 10 years spawned baby clutter. Angry baby clutter.

I had unopened rolls of wallpaper border that were part of my son’s and daughter’s room décor, two rooms ago.

(Remember borders? Gosh, the first thing I did when we moved into our last house was border up every room! EVERY ROOM MUST HAVE A COORDINATING BORDER. And also a basket with coordinating fake flowers. And I must wear stirrup pants while decorating these rooms. I miss the 90s.)

I kept every unused party hat/party favor/happy birthday sign for every birthday since we moved here: That’s 3 kids x 10 birthdays each. I could have sold these items on Craig’s List and made more than I made on my current ad placement and Chess King, combined. (It’s recommended that I generate multiple streams of income.)

3. The new house is coming along nicely. I’m sorry I have not posted any pictures of it, but I’ve been informed by my husband that he doesn’t like “people in his business.”

He probably should have mentioned that in 2008 when I “started a blog” on the “World Wide Web.” He obviously doesn’t know how close I am to all of you and how trustworthy you are with our personal information.

The trim guys started this week on the mantles, the built-ins and the molding. The tile guys started yesterday in all the bathrooms. The first coat of paint is up, so we can see our colors. It’s starting to look more and more like a real house, and not just a bunch of wood and cement surrounded by dirt.

A little glitch, though: yesterday, I was supposed to go and meet the tile guy, to “go over details.”

I must preface this by informing everyone that I picked out the tile, um, probably 7 weeks ago? And in the last six months, I have selected approximately 27,000 additional items.

I may or may not recall the details of each selection.

That said, I went yesterday, thinking it would be easy to “go over details” once I actually see the tile and refresh my memory—just look in the box, remember the selection and go, “Yep, that’s what we picked. Looks beautiful! Can’t wait to see it when it’s finished.”

Except, when I looked in the boxes, only about half of it looked familiar! And the tile I was most unsure about was OUT OF THE BOX AND HAD ALREADY BEEN LAID.

(This has absolutely nothing to do with the house, but typing that last sentence reminded me of a funny Jon story. He told me that when he was little—like 6-years-old—he gave a little figurine to his Mom for Mother’s Day or her birthday or something. It was a little chick in a broken egg and it said, “You’d be smiling too, if you just got laid.” Ha!)

Back to the tile that I did not recognize:

Let’s just say, it is a good thing I wasn’t trying to pick out someone from a line-up, lest I send the totally wrong tile to prison.

I tried to hide my panic, but I stink at hiding my feelings. So, basically, I blinked a lot and went, “hmmmmm….” And also, I made horrible jokes about how they’re going to have to rip it all out and start over.

Free House-Building Tip: If you want to completely freak out your project manager and the Tile Guy, act like you don’t recognize the tile they just spent all day laying. And then joke that they have to rip it up.

I am so AWESOME at house-building!

Then Tile Guy, who probably wondered if I had been drinking or perhaps was recovering from a stroke, started in with All The Questions:

Oh my gosh!!!! Is this a trick? No one told me there would be a QUIZ on all this!!!! I didn’t study! Are you messing with me? Are you filming me? Are you really a celebrity DRESSED as Tile Guy? Please be George Clooney or Matthew McConaughey!

I apologized profusely to Tile Guy and Project Manager, and promised that Jon’s brain was fully in tact, unlike mine, and he’d figure all this out. I got in the car and “calmly” phoned my husband and asked “sweetly” if he could please go to the new house “at his earliest convenience” and identify the delivered and partially installed tile, thereby letting the Tile Guy know he does not, in fact, have to rip up and reorder ALL OUR TILE.

I wish this story ended with Jon getting to the house and recognizing everything as exactly what we ordered, and then reassuring me that all is well, and life is good. That would be so nice, wouldn’t it?

No, instead he called and said, “I don’t remember choosing this for the basement bathroom. And what is this little tile? Isn’t this supposed to be in the girls’ bathroom?” And so on.

The good news is, we are both clueless.  And that, my friends, is the key to a happy marriage: Mutual Cluelessness.

And neither of us is willing to die on this sword. The tile is pretty, and it will stay, and it will be awesome, and no one ever has to know that we have no idea if it’s ours. We will adopt it and love it and make it our own. We’ve done that with cats. And children. Certainly, we can do it with tile.

4. Speaking of children, Elliana is the cutest. Last night, Jon was putting her to bed, when she jumped up and ran into the bathroom. After checking herself in the mirror, she crawled back into bed. Jon asked her what she was doing, and she said, “I just wanted to make sure I look beautiful.” And Jon said, “But you’re going to bed.” And she replied, “Dad, you ALWAYS have to make sure you look beautiful.”

She doesn’t lack self-confidence, that’s for sure. 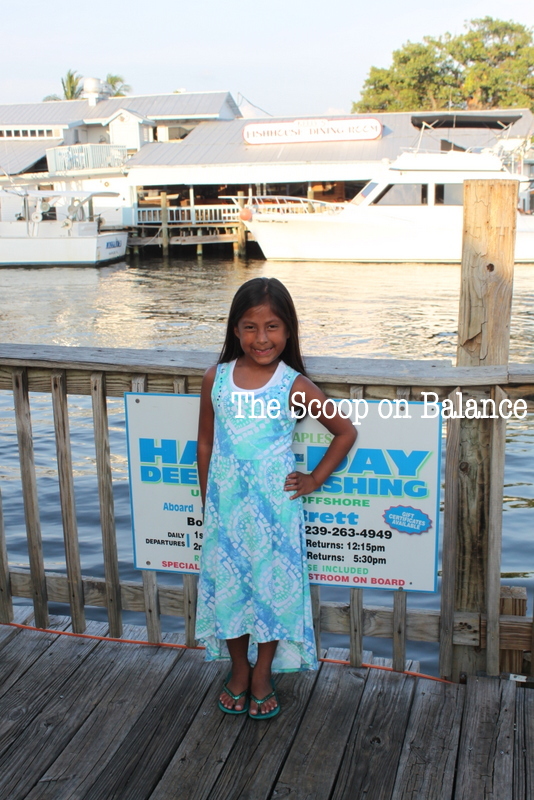