This sounds neither motherly nor Christiany, but here’s the deal: I hate mean kids. I do. I hate them. I want to gather them all up by the nape of the neck and flick them in the head, one by one (I don’t want to abuse them.  Just a flick.) And then I want to lock them all up in a room, so they can leave my children alone and, instead, live out the rest of their days being mean to each other with sore neck napes. (Again, not abusively…I just want them to stay away from my kids.)

But, that would be wrong and bad. And also, illegal. And not at all like Jesus.

The other night my 12-year-old walked off the basketball court with his head hanging low because a mean kid on his team was mocking him.

“Every time I complimented someone on my team or said, ‘Nice shot,’ this kid imitated me and laughed at me. He just kept doing it even when I asked him to stop. I don’t understand why kids always make fun of me. Sometimes I just feel like the whole world hates me.”

One Mean Kid can make him feel like the whole world hates him.

(Cruel irony: I signed Elijah up for this team to help him gain self-confidence and make friends.)

I don’t normally confront other children. In fact, I can’t recall a time when I ever have. But this incident made me angry and before I knew it, I was marching up to Mean Kid to give him a talking-to.

I calmly (kinda) approached Mean Kid and said, “Hey. I want you to be careful how you talk to my son and your teammates or I’ll be talking to Coach and your parents about it.”

(Oooooh…SCARY! Clearly, I hadn’t planned out my threat. It all happened in less than 3 minutes. I mean, as an adult, what exactly do you say to frighten the crap out of a Mean Kid–that is legal and moral? I’m gonna flick you in the head and lock you in a room???)

Mean Kid immediately straightened up and said, “Sorry, Ma’am.” And then, after what looked like a talking to from his father, he approached me a few minutes later and said, “I’m sorry again, Ma’am.

I guess I did scare him, after all.

Then I searched the gym for my deflated and defeated son to put my arm around his shoulder and tell him I got in Mean Kid’s face and Mean Kid apologized.

Then Elijah leaned into me and said, “Thanks. I’m so glad I have a Mom who sticks up for me.” 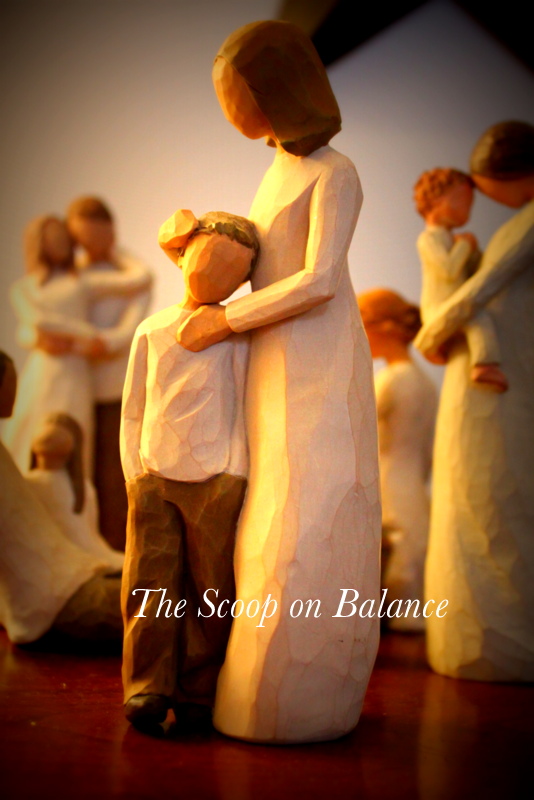 (Once a kid down the street picked a physical fight with Elijah—even pushing him and grabbing him around the neck. And Elijah threatened him with, “Oh, you just wait, I’m gonna tell my mom. And she does P90X!”)

(I don’t know if he thought I might actually go pummel this kid, or maybe challenge his mom to a push-up contest, or what.)

The next morning at breakfast, I seized the teachable moment and gave Elijah a Life Talk.

I said, “Here are a few things I want you to know today:

But that voice in your head that says, “Sometimes I feel like the whole world hates me”? That’s Satan. And that’s a lie. Not everyone hates you. There are way more people who love you than people who don’t.

You should always tell an adult when someone is mean to you. Tell your coach, tell your teacher, tell me. Whether it’s mild, like at basketball practice, or major, like constant taunting and bullying, tell someone. A trusted adult will be able to tell the difference between the two and help put an end to it before it goes too far. And just FYI, I will ALWAYS be on your side.

Don’t be afraid to call the bully out. Kids who privately mock you behind a coach’s back are cowards. It’s okay to say, “Hey, stop it. We’re teammates and that’s not cool.” Say it loud enough for Coach to hear you. Shining light on darkness makes darkness go away.”

Then I leaned across the kitchen counter, looked him in the eyes and said, “If you hear anything I say today, hear this, Elijah. It’s the most important thing I’m telling you: Don’t EVER be the Mean Kid. Ever. And when you see another kid getting picked on, for the love of all that is right and good, go rescue that kid. Go put your arm on that kid’s shoulder and tell him you are on his side. Then go up to the Mean Kid and say, “Stop it.”

Some kids may be getting picked on at school AND at home. Some kids might have parents who abuse, verbally and physically. They may not have a mom and dad who love them and empower them to deal with bullies.

You could change his life if you stick up for him, Elijah. You might be the only one who sticks up for him! Be THAT kid. Be the one who sees the hurting, downcast kid and RESCUES him.

Finally, remember what the Bible says about sowing and reaping. If you sow encouragement, peace, strength and protection in your relationships, you will reap the exact things. You will find yourself surrounded by others doing the same to you and for you. You will attract friends who value the same things you do. God will see to it. God is on your side, son.”

Elijah’s countenance changed. I could see hope in his eyes. Hope that he had power to handle future Mean Kids. Hope that maybe he could change the life of a hurting child by simply sticking up for him.

And hope that if this kid messed with him at the next practice, I would go all P90X on him.

I address many of the issues raised in the comments in my follow up post:  More on Mean Kids.  I have also tried to respond to as many of the comments as possible.  If you want to see how much this issue resonates with other parents, it’s worth your time to browse the comments.

For even MORE on parenting, listen to The Balanced MomCast