Now a man named Lazarus was sick. He was from Bethany, the village of Mary and her sister Martha. This Mary, whose brother Lazarus now lay sick, was the same one who poured perfume on the Lord and wiped his feet with her hair. So the sisters sent word to Jesus, “Lord, the one you love is sick.”

When he heard this, Jesus said, “This sickness will not end in death. No, it is for God’s glory so that God’s Son may be glorified through it.” Jesus loved Martha and her sister and Lazarus. Yet when he heard that Lazarus was sick, he stayed where he was two more days.

Can you imagine the silence in the household of Mary and Martha in the days following Lazarus’ death?

Silence, except for the weeping at the loss of their brother.

Silence, except for the questions expressed between sobs and moans…

“Are you sure you told him Lazarus was really, really sick?”

“What is taking him so long?”

“I thought he loved us…” 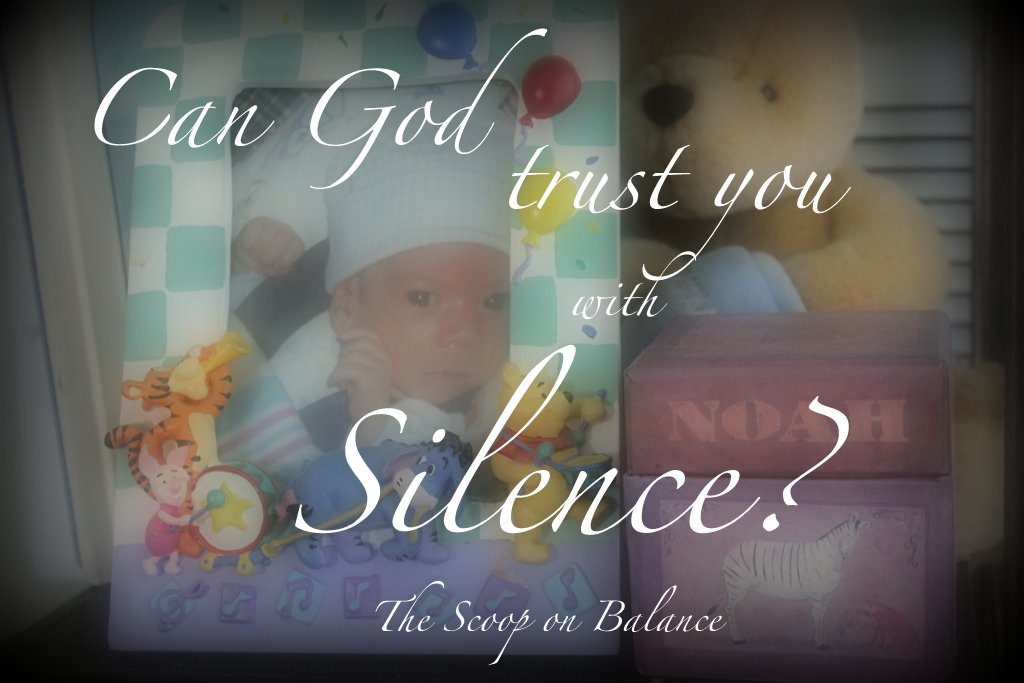 In June of 1998, I lost my precious 9-month-old son, Noah. Though I was surrounded by loved ones comforting and aiding in funeral preparations, the silence was deafening. Frightening, actually. For the first time in my life, I found myself questioning God’s motives and His ability to act on my behalf.

Like Mary, I was comfortable worshipping at the feet of Jesus. I loved spending time in His presence, soaking up every word coming from His mouth. I was Jesus’ friend and I knew it. I never hesitated to run into His arms whenever I needed Him.

But here I was: instead of receiving divine healing, I was sitting in a hospital room singing lullabies to a shell of what used to be my baby. I was loading my car with an empty car seat and a bag of baby boy clothes. I was picking out caskets and floral arrangements and wording for an obituary.

And in the chaos of the days that followed, all I heard from heaven was silence. Silence except for the questions expressed between sobs and moans…

“Don’t you know that Noah died?

“What is taking you so long?”

“Why aren’t you coming?”

“I thought You loved me”

“I thought I loved you…”

Oswald Chambers in his book “My Utmost for His Highest” has an incredible perspective on God’s silence:

Has God trusted you with His silence— a silence that has great meaning? God’s silences are actually His answers. Just think of those days of absolute silence in the home at Bethany! Is there anything comparable to those days in your life? Can God trust you like that, or are you still asking Him for a visible answer? …His silence is the sign that He is bringing you into an even more wonderful understanding of Himself. Are you mourning before God because you have not had an audible response? When you cannot hear God, you will find that He has trusted you in the most intimate way possible— with absolute silence, not a silence of despair, but one of pleasure, because He saw that you could withstand an even bigger revelation. If God has given you a silence, then praise Him— He is bringing you into the mainstream of His purposes.

The mainstream of His purposes.
I love that.

Though ten years ago on that devastating June morning, I never would have comprehended what God would do in me in the next several years as a result of losing my son. Certainly, no one could have explained to me that God was bringing me to the mainstream of His purposes, or giving me deeper revelation. That He was entrusting me with anything or bringing me into intimacy.

Quite frankly, I could not have cared less about His purposes, revelation or intimacy.

All I wanted was my baby.

In those days and months following my loss, I pounded on Heaven’s door and demanded a response…because of the silence.

I screamed. I fought. I yelled. I cried. I beat my pillows and I threw things across my kitchen…because of the silence.

I wrestled with God. Literally. With truths I previously thought to be sound, but now questioned. With clarification as to who He was, exactly, and what He promised and did not promise, exactly. With whether or not I could trust a God who would give me parking spaces I prayed for at the mall, but would deny me the healing of my little boy.

All because of the silence.

Slowly, carefully, lovingly, God spoke. And I became aware of the fact that He never really left, He was holding me tighter than ever.

Ask me anything you need to.

I am with you.

Unlike Mary and Martha, I never received an explanation as to why Noah died (I plan on getting that first thing the other side of glory.) Nor did I receive the miracle of Jesus raising Noah from the dead. (Trust me, I asked Him.)

The miracle I received was my resurrection.

God took me from a crumbled mess of tears and sorrow and transformed me into a woman full of joy and expectancy. He took me from one doubting the goodness and power of God to a woman who now falls on her face daily in awe of God’s bigness. From a woman asking, “where are you Jesus?” to a woman who confidently shows others the way.

Can God trust you with silence?