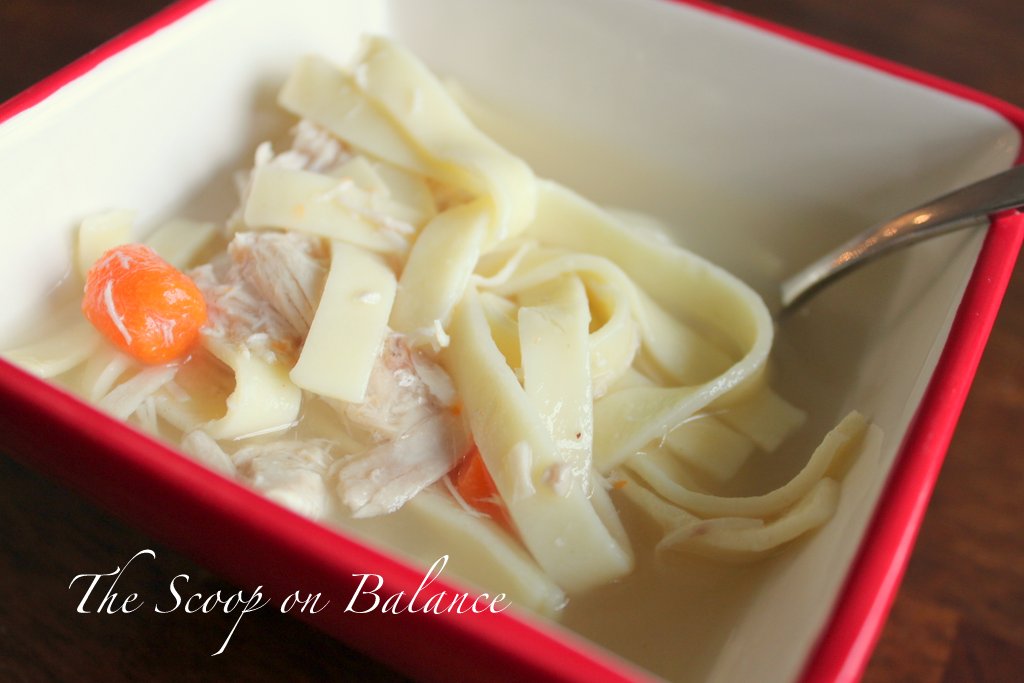 1 whole turkey carcass, or if you didn’t cook this year, as much of the bones and guts you can wrestle away from grandma
1 or 2 whole large yellow onions
1 whole bunch of celery, including all the leaves
A few cans of organic chicken broth, or just water
A few cubes of chicken bullion (find an all-natural brand)
A few cloves of garlic
Carrots: either whole baby carrots, shredded carrots, or cut up carrots, whatever kind you like
I package of egg noodles, whatever width you like
Cut up chunks of white meat from the turkey
Salt and pepper to taste

Get a giant stock pot and put in the carcass or guts.

Cut up the onions in quarters and pop those in.

Cut the end of the celery and pop the whole bunch in.

Add a few whole cloves of garlic and a few cubes of bullion.

Cover the entire thing with chicken broth or water or a little of both. Add several large pinches of salt and pepper.

Put a lid on the stock pot and bring to a boil. Reduce heat and simmer for at least one hour. I simmer mine for a few hours, stirring occasionally.

As it’s simmering, take a large spoon every once in a while and skim off the stuff that floats to the top.

When you are done simmering, transfer the broth to a clean pot, making sure to strain out all the carcass and vegetables. I usually strain it a few times.*

Discard the vegetables and carcass you strained out.

Add your carrots to the broth and simmer until the carrots are tender.

Cook noodles according to package directions in another pot, and strain.

*Tips:
I usually ladle the broth out as much as I can before I dump the carcass and the vegetables into the strainer. It’s easier to handle the hot stock pot when it’s almost empty.
This broth freezes up really well. I usually take the strained broth (before adding anything else to it) and freeze it for soup later in the winter. All you need to do is thaw, and add noodles and carrots (if desired).  You can also do this exact thing with a raw whole chicken or chicken bones.  This is a very basic recipe that I use to make chicken stock/broth to use in all my recipes.   Good stuff.