What I haven’t told you is that I’ve decided to go vegan for a few weeks.  I know.  I have a half gallon of half-and-half in my refrigerator.  I was reading up on veganism and noticed that a common trait among vegans is they are across-the-board THIN people.  Have you noticed that???  They (the thin people) say it just happens naturally when you stop eating things with faces.  Seriously, they say that.

Therefore, if at least one or two of these eighteen pounds don’t “naturally” migrate off my body by the end of the month, I will reunite my coffee with my half-and-half.  In the mean time, I’ve been drinking it with warmed up almond milk.  Which isn’t bad, as long as I put a lid on it.  My coffee drinking is a visual experience for me, and if it isn’t the right color, it messes with my psyche.

That said, I’m having a lot of fun in my kitchen creating vegan meals.  My husband has been pleasantly surprised at how good everything tastes, while my children are hiding the cheese and pepperonis in their closets for fear “soy versions” will magically appear.

One of the first things I did in my little conversion to veganism was make a vegan version of the Chewy Chocolate Chip Granola Bars from the last post.  My husband took a few to work and apparently, they were all the rage with the office folk  So, for the sake of Jon’s co-workers, I give you 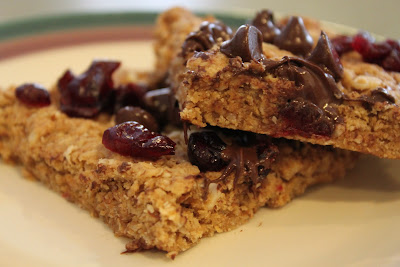 Ingredients (I use all organic)

1. Preheat oven to 325 degrees F (165 degrees C). Lightly grease a jelly roll pan or a cookie sheet, unless you have a non-stick one, which I do.

2. In a large mixing bowl combine the oats,  flour, nuts, baking soda and flax seed until well blended.  You may want to pulse this a few times in a blender or food processor, which will make the mixture a little finer, like flour, and easier to blend with the wet ingredients.

3. Combine wet and dry ingredients.  It works best if you add a little bit of the dry ingredients to the wet ingredients  in batches.  Toward the end of the mixing, it also works well if you squish it with your fingers.  If it’s too crumbly, try adding a little more honey or peanut butter.

6.  Let cool for 10 minutes then cut into bars. Let bars cool completely in pan before removing or serving.
I made 36 squares at 181 calories each.  But you won’t be able to eat just one, so double the calories for a serving.