1. In P90X2 News: I started Phase 3 this week—Two new workouts: one upper body, one lower body, each done twice a week, with a day of yoga in between. My initial assessment? I love Phase 3. It incorporates many of the balance, plyometric and strength moves of the other phases, puts them all together and makes you do them really, really fast with no breaks. It’s hard, but I like it. I am sore (in a good way) for the first time in a long time.

2. I didn’t actually do the yoga this week, because it was so nice outside and I wanted to walk instead. I hope the P90X2 police don’t arrest me.

3. What do you get when you cross a 5-year-old who loves to play Barbies while her Momma does P90X2, with the fact that said 5-year-old knows how to take Barbie clothes off but has a difficult time putting them back on??? 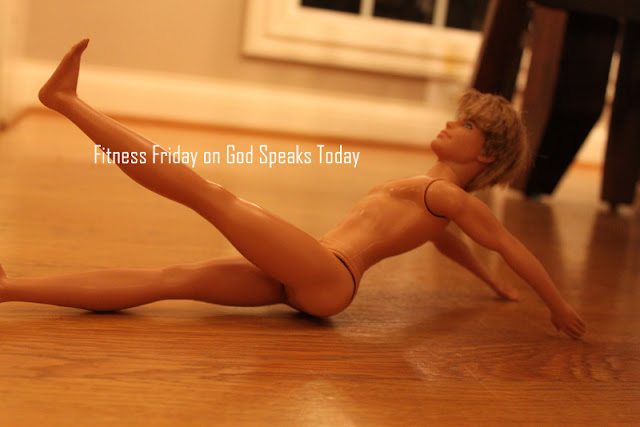 You get Naked Ken Doing Yoga.

4. For the record, I wear clothes when I do yoga.

5. This week, I gained 1 pound and 1% body fat. But I lost another 2.5 inches (for a total of 10 inches since Jan 2!). Losing inches but not weight OR fat? Odd. And they aren’t even inches where I can suck in and cheat the measurement. The inches lost are on my biceps, my butt and my hips. I’m not sure what I’m losing, exactly. I would guess muscle, except I’m doing a ton of strength training. Not to mention the fact that my butt and hips had almost no muscle to speak of in the first place, therefore, none to lose. Maybe I’m losing skin. Like a bearded dragon. Shedding for the spring season. 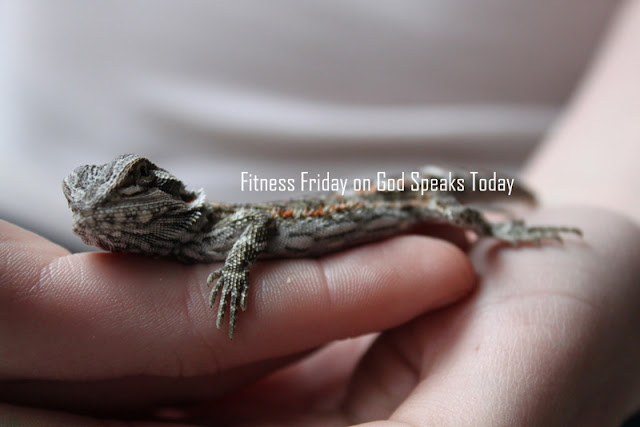 Makes no difference to me, as the 10 lost inches translates into “I can now wear almost all of my pre-Lexapro clothes.” Amen.

6. Speaking of spring and taking walks instead of doing yoga, I see daffodils in bloom and tiny buds on trees. And I think to myself, what a wonderful world.

7. In American Idol News: Season 11, baby. You didn’t think I forgot about American Idol, did you? Last night’s elimination was so intense! What a brutal way to go from Top 24 to Top 13. I agreed with all of the Top 13 picks, except I would have chosen Reed (the scattin’ drummer) over the 17-year-old falsetto boy with the gorgeous hair. It was a tough call. I mean, good hair ranks right up there with “funny” in my list of worthy attributes. I just think Reed is way more fun to watch and insanely talented.

8. In ministry News: I’m speaking at the Heartland Women’s Retreat in Edmonton, Alberta (Canada) the weekend of March 30-April 1. If you are in the Edmonton area, you can come see me. The ladies who planned the event said I could invite my friends…and you are my friends.

9. My daughter, Rebekah, turns 13 while I’m at the retreat. I’m taking her with me, and we are going to have a Mother/Daughter Weekend of Teenage Birthday Awesomeness.  She’s excited that she gets to go to a “foreign country” for her 13th birthday.

10. In fitness news: Disney’s Epcot Center is temporarily shutting down a new exhibit after complaints from the National Association to Advance Fat Acceptance (I did not make that name up). The exhibit was designed with the help of Blue Cross/Blue Shield as a way to help kids develop healthy habits, while avoiding those that lead to obesity. The intent is to convey a positive message about healthy lifestyles in a fun and empowering way. “Housed inside Innoventions, the park’s futuristic showcase of ideas, Habit Heroes features animated fitness buffs Will Power and Callie Stenics, who take groups of up to 12 guests through interactive rooms, where they fight bad habits such as too much television and junk food. Cartoon villains include the super-sized Snacker and Lead Bottom.”

12. The exhibit plans to re-open after some tweaking. So as to not offend the National Association of Fat Acceptance people.

15. I love Disney. Sure, I want to cover up Jasmine’s belly every time I see her outfit, but the fact remains, I cry every time I go there. I imagine the kid-section of Heaven looks a lot like the entrance to the Magic Kingdom. I don’t know for sure, but I’m guessing Disney is probably the single-most influential entity over children (outside of parents) in the world. I’m not saying it’s right, I’m just saying it is. Disney has a huge platform with the 12 and under crowd. And I, for one, am so proud of them for using this gigantic influence as a means to fight the childhood obesity epidemic in the U.S. I applaud you, Disney, for being part of the solution.

16. Shame on the National Association to Advance Fat Acceptance for criticizing their efforts to the point that Disney feels the need to shut down this exhibit.

18. I can and do love and accept people at any weight. Love and acceptance doesn’t mean “leave them in their unhealthy state.” It means the opposite. It means love and accept them enough to wisely instruct and train them to make wise choices. This way, they can still be the same beautiful children on the inside, only without type-2 diabetes and self-inflicted heart problems and sleep apnea and shortened life expectancy—health issues they will pass on to their own children. Shame, shame, shame on you, National Association to Advance Fat Acceptance. I think I might hate you.

19. In vacation news: I am trying to book a last minute spring break beach vacation. I tried, in vain, to get a house in Seaside, FL. Only, cute little rental houses in Seaside cost upwards of a lot of cash. I’m looking at Seacrest, Watersound or Rosemary Beach instead…anyone ever been there?

22. After we paid off our house, I was so excited, I posted it as my status on Facebook. My husband was somewhat concerned that my post might be misread as “bragging.” Or that people might think we were able to pay off our house, simply because we are “rich.” I told him, “Anyone who thinks we are rich has never seen our carpet.”  Or our outdated green counter tops. Or our barely functioning dishwasher.  Or our broken kitchen cabinets that I literally taped shut so they wouldn’t randomly swing open.

23. He agreed. We have needed to replace our carpet, et al,  for probably 3 years now. It’s become almost a badge of honor—no house updates until it is paid off. In fact, I have updated almost nothing in my home in 8 years of living here.

24. One of the keys to paying off your house is saying “no” to yourself about 100 times a day.

25. I went to the actual physical bank to write the final check, instead of mailing it in. The bank tellers were happy for us. So happy, in fact, that they offered me the opportunity to open a line of credit.

26. I paid off my house—and they wanted me to open a line of credit. The same day. Does anyone else see the irony in this?

27. I asked if there would be any kind of parade or anything for me. But there wasn’t. Turns out the bank is not nearly as happy about losing hundreds of thousands of dollars in interest as I thought they’d be.  They did clap. And they gave my daughter a lollipop. Then I did a little happy dance in the lobby. I hope they captured the happy dance on their surveillance camera.

28. Right after the look of horror on my face at the suggestion that I open a line of credit.

29. In blog news: I’m coming up on my 4-year Blog Birthday. And to celebrate, I’m thinking about taking a nice long blog break. As in, months.  Don’t be sad.  It’s all good.

30. (I just thought I’d throw that in there. To prepare you for my absence.)

31. I will write more about that next week.  And then probably not write again for a very long time.