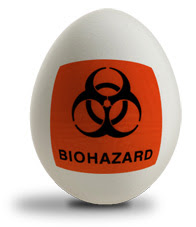 I knew it was gross, but I didn’t think it was this gross. The egg recall…have you heard? One thousand-five hundred people ill, because of contaminated eggs.

I’ve read the actual seven-page inspectors report, because that’s what I do…investigative reporting. Here are the highlights (???). I’m not making any of this up.

 Chicken manure piles up to 8 feet high (not 8 inches…8 FEET). In some cases, the manure was blocking the entrances to the chicken houses and forcing the doors open.

 Un-caged birds (birds that had escaped) using the manure piles to access the egg-laying area.

 “Dark liquid” manure seeping through the concrete foundations of the hen houses.

 Over two dozen live rodents spotted and counted in the hen houses by inspectors.

 Live and dead flies “too numerous to count.”

 Live and dead maggots “too numerous to count.”

 Wild birds living among the egg-laying hens, sitting in and eating their feed (bird flu anyone?).

Keep in mind: This is from a post-outbreak inspection. No one caught these problems BEFORE it was determined which farms were at the center of this problem. This situation is completely out of control. Our food industry needs an overhaul in a big way, before we kill anymore people.

Please, for the love of all that is right and good, spend the few extra dollars on your groceries to buy organic or local. Especially, if you are feeding children. If you aren’t convinced after this, there is nothing I can say. Except all the cool people are doing it. And you’d so NOT be cool if you didn’t do what I did.

A quick update on the progress of my “Fitness Initiative” a.k.a my quest to lose 18.8 pounds of weight-gain due to Lexapro, an antidepressant.

First, I don’t know about you, but I am getting so sick of keeping this darn food log. I find myself getting to the end of the day and seeing all I wrote was “5:00 am, coffee” at the top. And rather than trying to recount the whole kitten-caboodle, I scrap the day and just start fresh in the morning. That said, I’m still right on track with my eating. I don’t really have an eating problem. I am a genetic freak who actually enjoys healthy food.  I’m only keeping a food log because it is supposed to help expose hidden calories or something.

Second, speaking of coffee, I ran out of half-and-half yesterday, so I had the brilliant idea to stop drinking coffee altogether. I decided tea with almond milk and honey would be better for me than coffee with half-and-half and agave nectar. So, at 5 am, I brewed my tea and set about my day. At 7:45 am, I was slipping into a semi-dream state. The problem was that I was driving a vehicle at the time. Not good. At 8:00 am, I was in REM-level sleep on my couch, while Elliana watched “Hotel for Dogs.” At 2:30 pm, I was at Costco, buying a full half gallon of half-and-half. And at 5 pm, I was blissfully drinking coffee.

Third, my daughter is raising money to build a new band room at her school. Thus, she is wearing a pedometer for the next week to track the number of steps she takes in a day, and then soliciting pledges-per-step. She is currently all jazzed about walking in the evenings, which coincides perfectly with my Fitness Initiative. Thus, (I love saying “thus”) I am adding another 30-60 minute walk to my already established workouts, plus, I get to walk each night with one of my favorite people. Cha-ching.

Fourth, all that said, I have not lost one single pound in the last two weeks. In fact, I had a few days this past week where I suddenly gained 4 pounds, and shot up into a “weight decade” I have not seen since I was 7 (SEVEN!!!!) months pregnant. I stayed there for 3 whole days. Which would have brought my total weight gain to 20 pounds. I slowly came back down. But by “back down” I mean, to the point where I’ve only lost 1.5 pounds this entire month. It’s like “happy and sad” all rolled up into one.

Fifth, I’m still feeling some mild withdrawal symptoms from the Lexapro. Therefore, I’m certain this drug has not yet left my body and is therefore still prohibiting me from losing this weight and therefore making me completely insane, therefore, thus.

Sixth, I am giving myself one more month doing what I am currently doing, which will allow my body to rid itself of the Lexapro completely (hopefully) and beat my metabolism into submission. The only things I’m tweaking are my “free meals.” Currently, I allow myself 2 free meals a week, usually on the weekend. That is where I allow myself dessert or a glass of wine (or three) and larger portions of something yummy. I’m going to cut that down a bit. Just not be quite as “free.” It’s all subjective. I don’t know. Don’t listen to anything I’m saying. I buy half-and-half in bulk.  What do I know?