Reading this post will not only help you burn calories, but also help you decide how to vote in the up-coming presidential election! I’m not making this up.

First, the calories. A new study confirms that laughter is a legitimate form of exercise.

“…laughter is fundamentally a physical action. ‘Laughter involves the repeated, forceful exhalation of breath from the lungs,’ says Robin Dunbar, a professor of evolutionary psychology at Oxford, who led the study. ‘The muscles of the diaphragm have to work very hard.’ …prolonged laughing can be painful and exhausting. Rather like a difficult workout.”

What does that mean for you? Well, assuming you laugh, it means reading this post is akin to a painful workout.  I think that’s a good thing.  Therefore, I can almost guarantee you some good abs, because science is on my side.

Of course, laughter also produces an endorphin release, which is known to increase your pain tolerance. And the increased pain tolerance will help you endure the next week and a half of negative political ads, which, in turn, will help you make wise and informed decisions on November 6th.

Speaking of political ads (and good abs), did you know both Paul Ryan and Michelle Obama do P90X?  If you were to vote, based on this information alone, you’d probably be what they call an “undecided voter” which would qualify you to participate in one of those post-debate panels on Fox News.  Hello?  Bucket list!!!

For research purposes ONLY, I typed the words “Paul Ryan” into my Google search engine. And sure enough, the first suggestion Google gave me was, “shirtless.” Followed by “budget.”

Followed again by “Wikipedia.” Which is completely irrelevant to this post.

Again, for research purposes ONLY, I entered “Paul Ryan shirtless” into the Google search engine and–after thinking about how much I love my job–found this: 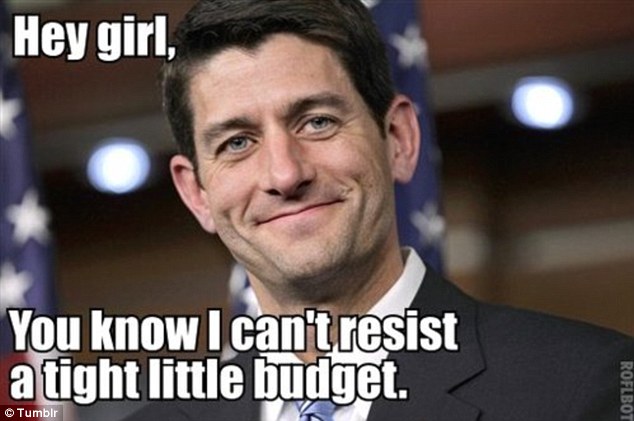 I have nothing newsworthy to report there.

I did not, however Google “Michelle Obama shirtless”.  Because I have boundaries. And an aggressive internet filter.

But here is Michelle Obama flexing her biceps:

Say what you want about Barack–but Michelle is just classy.  I like her.  In fact, in my fantasy presidential race, Michelle and Paul Ryan run against each other.  Wouldn’t that be cool?  The debate could include a “Feats of Strength” category.

More on Michelle:  If your kids go to a public school, you are probably already familiar with Michelle Obama’s healthy school lunch initiative, Healthy, Hunger-Free Kids Act of 2010. The policy was intended to not only wipe out hunger and malnutrition among American students, but also encourage healthy eating. It calls for changes in the school lunches by adding fruit and vegetables and fewer sweet and fatty foods. It also limits the calorie count of each lunch to 850.

My kids go to private schools, so we are not affected by the initiative, but I’m happy that someone is doing something–ANYTHING— about the school lunches.

I have some strong opinions about what the schools feed our kids. The greasy, fried, nutrient-deficient lunches need to stop. Our kids are obese, tired and ill-behaved. Terrible food is not helping.

So, imagine how excited I was in August, when for the first time ever, the administration at my kids’ elementary school sent home an “approved snack list.” The teachers explained that kids learn better and behave better when they eat healthy snacks.(Agreed!) Therefore, they kindly asked that any snack sent from home be from the “approved list” only. (Great!)

Finally, I thought, some recognition that bad food adversely affects our kids. Even though I was a bit suspicious about what they deemed “healthy” (Cheeze-its? pretzels? fruit gummies?), I was hopeful this meant junk food in the classroom would cease. Or at least decrease dramatically.

Not so. In just the first 2 months of school, my children have already been served in the classroom

(I know some teachers and fellow parents read this blog. For the record, I love our school. In every parent survey since my 8th grader has been in kindergarten, I have expressed my clear opinion that I love the school, but for the junk that is constantly served in the classroom. My husband has spoken to a board member about the issue. And I accepted an invitation in the spring from another campus of the same private school system to teach the students and their parents how to make healthy snacks. So, if you are wondering if I’m just ranting or if I’ve actually tried to do something about it, the answer is yes. I’m ranting AND I’ve tried to do something about it.)

Yes, Michelle’s school lunch initiative. Apparently, most people are not supportive of it, which I find terribly disheartening. Turns out, some parents never introduced fruits and vegetables at home (duh—that’s why we need it), so kids don’t like the veggies at school. Instead of eating them, they are throwing away their lunches. Thus, they are hungry. Which ironically, is the exact opposite of what the initiative hoped to achieve.

Some students in Massachusetts actually created a black market for chocolate syrup. Really?  Was a chocolate syrup an entree on the school lunch menu at one point prior to this?? What kind of crazy nation is this???  If I put a few more question marks, will I appear more baffled??????

In addition, high school athletes claim that an 850-calorie lunch is just not enough to sustain them. I guess I get that.  But to this I ask: can’t they pack a snack?

Or, maybe if they didn’t throw out their fruit and vegetables…

You may have already seen this viral You Tube video, written and produced by a group of hungry student athletes in Kansas. It’s kinda funny–a parody of the song “We Are Young.”

(Note: this post contains several You Tube Videos. If you are reading this through your e-mail subscription, you will need to click over to the blog to see them)

Speaking of kids and nutrition (or lack thereof), Honey Boo Boo allegedly fell asleep on TV during her interview with Dr. Drew. I have never watched Honey Boo Boo or Dr. Drew, but had to follow up on this story—you know, for research purposes ONLY.

You can see the clip of the interview here:

Or better yet, I’ll just save you 53 seconds of your life and tell you what I think: Clearly Honey Boo Boo’s mamma needs to feed her a healthier diet, and maybe administer some more effective discipline. But, I don’t care what they say, that child did not fall asleep. If you’ve been around kids longer than about 5 minutes, you recognize a fake-snore when you see it. It was a fake snore. She’s a kid. She was playing.

And this last story isn’t news (as if that last story was?), but it’s funny: Here’s Ellen challenging Michelle Obama to a push-up contest. What a hoot.

Those P90X arms can crank out some push ups. I should know. Just last month, I beat my husband in a push-up contest, fair and square, I kid you NOT. My children counted and they stand as my witnesses.

I am the champion–of the world.

My husband accepted his defeat graciously, despite the fact I posted it on Facebook for all our real-life friends and family to see. And now, of course, on my blog for the rest of the world to see. It’s probably because he knows he can finish a Half Iron Man (1.2-mile swim, a 56-mile bike ride, and a 13.1-mile run) in under 5 hours. He also knows  I would die five minutes into the swim and never make it to the run or the bike.

So, he lets me have the push-ups contest.

Linking up with Jill Conyers today!