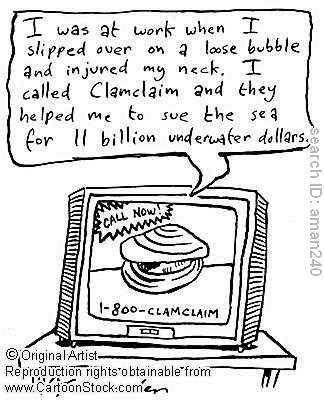 In a past life, I worked outside the home. After I graduated from college with a degree in General Communication, I landed a job at State Farm Insurance as a Bodily Injury Claims Representative. A BI Claim Rep handles claims for injured people from the time they are reported to the insurance company until they are completely settled. Fender-benders and total losses, neck pain and death claims, lawsuits and liability—a B.I Claim Rep must become an expert in all of it.

Even though I was friendly and approachable, injured people were not very nice to me. You know those daytime commercials where the trustworthy attorney with slick hair and a cheap suit tells you that if you are injured in an accident, YOU MUST NEVER COOPERATE WITH THE INSURANCE COMPANY?

And you know how when your car is in the shop and your neck hurts and you can’t work and you just want to scream at someone to vent off your frustration about the stupid jerk who ran his car into you?

Turns out, no amount of approachability can counteract a cheesy daytime ambulance-chaser’s commercial coupled with neck pain. Nor does a degree in General Communication prepare you for determining who ran the red light or whether the injury sustained in this accident was partially the result of a pre-existing condition.

I was inexperienced. I was a new Christian. I was single. I was a certified People-Pleasing Perfectionist. I wanted so badly to do a well in my first real job, but had no idea what the heck I was doing. So, as a 21 year-old who was just handed a ton of grown-up responsibility, it didn’t take long for me to have my first official freak out moment.

I was working over a holiday weekend, trying to catch up on the hundreds of pending files demanding my attention, when my Divisional Superintendent walked into the office.

This would be my boss’ boss. The guy in the corner office. Who didn’t much mingle with the mere mortal claim reps. And here he was looming over my cubicle wall.

I was certain he was wondering why I was so far behind in my work that I’d have to come in on Labor Day. Why I was taking so long to catch on? Why I didn’t manage my time better during the week? I braced myself for the correction and firm instruction I was about to receive.

Instead, he set down his brief case, took off his coat, picked up my giant stack of files and said, “C’mon, follow me.”

We went to his corner office, where we sat cross-legged on the floor. He opened up the first file and said, “Okay. Let’s work on these together.” One-by-one, for hours and hours, we sat going through each file, while he patiently explained the best methods for working an insurance claim from beginning to end.

As I was packing up my stuff to go home, he looked at me and said, “Sandy, there is not a mistake you can make here that will be so bad you will lose your job. Except if you bring a fire arm on the premises or try to sell people illegal drugs…that would be bad…but other than that, there isn’t anything.” Then smiling warmly he said, “Relax.”

From that point on, I had a new confidence in my role. Not because I had learned a lot (though I did), but because I knew I had the freedom to screw up. And though it may be counterintuitive, it didn’t make me feel free to goof off and work half-heartedly. Instead, it made me want to work all the harder to do a good job. Not out of fear, but out of respect for my boss and the company that employed me.

Isn’t that such a picture of God’s love and grace? We find ourselves in overwhelming situations. Situations way too difficult for us to handle alone. We strive to do our best. We want to please God. We want to do our jobs well. Afraid of heavenly backlash, we try all the harder. When God draws near, we cower, bracing ourselves for harsh judgment. For chastisement. For discipline.

Instead, God lifts the burden and says, “Come on, follow me.” Then He gently instructs and guides us through the difficult process. He doesn’t condemn. He doesn’t chastise. Instead, He instructs. He guides, He leads, He loves.

Amazing Grace. Logic says it will cause us to take advantage of God’s love. But reality reveals a new freedom to move confidently into our divine calling.